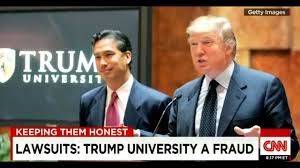 To use Donald Trump's logic, just as he challenged President Obama's citizenship because he didn't present his full birth certificate, we must conclude that the reason he refuses to release his tax returns is because he's financially insolvent. Flat out broke. Why else would he so stubbornly be keeping the official IRS documents under lock and key?

Here's what we do know for certain: that Trump's a failed businessman on many levels, including the airline, steak, vodka and mortgage companies, Trump University and, of course, the bankrupt casinos.

Many believe that the "billionaire developer's" vast real estate "empire" is little more than the ubiquitous Trump brand slapped on other developers' buildings; that his real "wealth" consists mainly of a ginormous inheritance, estimated at between $40-$200-million from his uber-wealthy developer father Fred. Trump's detractors suspect that if not for his father's funding throughout his career, and the life-saving bailout by his bankers and creditors in 1990, his overall business would've gone bankrupt.

Trump's tax returns, unlike the voluntary financial disclosure forms he's filed, which consist of self-reported data, would show just how much he's worth, how much income he generates from his businesses, and just how "self-made" he is versus the "success" due to inheritance.  Since his entire cache rests on his status as a great businessman and deal-maker, the release of his returns could shatter decades of masterful brand-building.

The Republican front-runner claims he cannot release his tax returns because he's in the middle of an IRS audit. But the IRS disagrees, stating that it's up to the individual whether or not to share tax returns.

Which begs the question, just what the heck is he hiding? Is he afraid that when the economic curtain is pulled back it will reveal, in an unprecedented case of smoke and mirrors, someone very different than the financial wizard he's been shamelessly promoting since the 1970's? Will it prove that Trump's a financial fraud? If so, his "empire" would come crashing down like a house of cards.

Until Trump releases his tax returns for the last ten years there will be an ominous cloud of doubt hovering over his income, his net worth and his claim to be a self-made billionaire.
Posted by The Ostroy Report at 8:21 AM

A phenomenal post! Mr. Trump's lack of transparency is a red flag as large and imposing as his towers.