Is Donald Trump Losing His Mind? 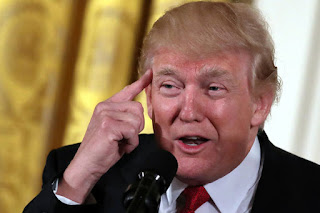 Donald Trump, the 45th president of the United States, appears to have achieved an impressive new level of madness. You would think that being Commander-in-Chief and Leader of the Free World is an all-consuming job, starting in the early morning hours and stretching well into the night. Between myriad pressing domestic and global issues such as the economy and fighting terrorism there should be little else that successfully competes for Trump’s attention, right? Guess again. These days, rather than doing his job and promoting the interests of America, he seems more preoccupied with promoting Fox’s television shows and Tweet-shaming everyone from Arnold Schwarzenegger and the New York Times to the GOP’s Freedom Caucus.

When he’s not heading off Friday nights to one of his many non-DC “White Houses” like Mar-a-Lago for a weekend of strenuous “work golf,” Trump spends an inordinately large percentage of his time soothing his bruised, fragile ego. This bizarre activity includes tweeting like a high school mean-girl; holding campaign-style rallies in a pathetic quest for love; obsessing over his ‘poor treatment’ on CNN; or watching the Trump & Co. publicity agency known as Fox (where he apparently gets much of his national security intelligence).

We’re seeing a heightened state of megalomania. Among his many self-aggrandized accomplishments, Trump’s already turned around the economy (didn’t realize it needed turning around); created “thousands and thousands” of jobs (or more commonly known as Operation Take-Credit-For-What-Companies-Have-Been-Planning-for-Years); stopped the flow of illegal immigration across the Mexican border (something that’s been in steady decline for years); and has continued to deny Russia’s meddling in last Fall’s election... which Dick Cheney likened to “an act of war” and which has been confirmed by 17 national security agencies... and is now the subject of two (albeit one very circus-like) Congressional investigations.

Forget that Trump’s so far suffered humiliating defeats over Obamacare’s repeal/replace and his loathsome Muslim Ban, both of which were a wake-up call for him on how our system of checks and balances works. And then there’s the apparent failure of his border wall (ya know, the one Mexico’s paying for), which served as an effective xenophobic campaign prop but is likely not his only erection problem.

We have a president who is obsessively consumed with his own image and is paralyzed by a desperate, pathological need for attention and adulation. Nothing else matters. Not the best interests of America, his marriage, his family or his business. To paraphrase Sting, every move Trump makes, every step he takes, every claim he stakes first flows through this dysfunctional filter. The self-styled “counter-puncher” who surrounds himself with generals in an attempt to mask the shame of draft-dodging cowardice is, deep down, a scared, insecure, affection-starved, emotionally-bankrupt little man. And now he seems just plain crazy.

I imagine Trump wandering the White House alone at night. He’s clad in a Power Rangers onesie. He roams aimlessly... a bored, sad, angry-than-ever lonely old unsatisfied man battling his raging demons. There are televisions on in every room, blaring cable news. The shrill rantings of Anderson Cooper and Rachel Maddow are made tolerable only by the soothing sweet nothings of Bill O’Reilly and Sean Hannity. He’s instinctively drawn to Fox of course, but he can’t help turning his attention and ire to the critiques and endless negative stories on those shameless bastions of fake news, CNN and MSNBC. He screams at the TVs. He throws a $2500 Ferragamo loafer at Maddow’s oversized head on his yuge 110-inch screen. He grunts and groans. Yells out to no one, “Why doesn’t everyone see how amazing I am?!” The man who claims not to drink is utterly shitfaced on a $1-million bottle of Russo-Baltique, a gift from Vladimir Putin. He reaches for his iPhone and taps the Twitter icon and, well, you know what happens next.

Posted by The Ostroy Report at 7:09 PM