An Open Letter to Trump Voters About Trumpcare 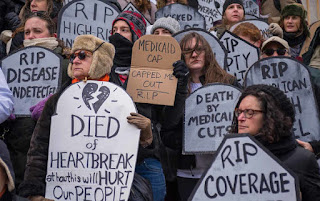 It was a very big day for you yesterday, what with the House’s passage of the American Health Care Act ― commonly known as Trumpcare ― formerly known as the Affordable Care Act (ACA), commonly known as Obamacare. A smug President Trump, at his post-vote Rose Garden masturbatory gloat-fest, bragged, “Make no mistake about it...this is a repeal and replace of Obamacare.” Yippee! Um...er...right?

I’m not sure you’re doing much celebrating today. Yeah, I know, it was so much fun during the campaign to revel with Trump over a future repeal of the “super-awful” health care program with the black guy’s name on it. In fact, I suspect the black guy’s name had much to do with how much you hated it, which explains why so many of you ― as this video astoundingly illustrates ― thought the ACA was great and Obamacare sucked, not even realizing they were the same program.

But despite that you get most ― if not all ― of your biased, fake news from Trump’s PR firm, Fox News, I suspect you woke up this morning feeling the same sort of shame after a really bad one-night stand. That sickening feeling of looking over at the horribly unattractive person lying next to you, who somehow was so appealing the night before, and thinking, “Jeez, what the hell did I do... and can I undo it?”

Yeah, I suspect today might really be a day of mourning for you. A day filled with fear, actually, as you are starting to realize that you just got fucked way worse than in that awful one-night stand ― that Trump, Speaker Paul Ryan, and House Republicans just royally screwed you out of that super-groovy health care coverage the black dude gave you.

Right about now, you may be thinking... “So what, I don’t have a preexisting condition. No cancer, diabetes or arthritis. I’m good, right?” Not so fast. Money Magazine cites as many as 50 examples of everyday maladies, including acne, heartburn, and high cholesterol ― not to mention C-sections and Lyme Disease ― that under Trumpcare could result in denied coverage or coverage with premium increases as much as 500 percent. Do I have your attention yet?

Trump promised “insurance for everybody.” He promised better coverage, lower premiums, lower deductibles. He promised that the poor and middle class would benefit most. He claimed, as he still does, that Obamacare is a “disaster” that’s on a “death spiral.” All lies.

But it’s actually Trumpcare which doctors, hospitals, and insurers (in a rare instance of unity, as the New York Times reports) think is a disaster. Also, as the Times reports, it’s the wealthy who’ll benefit most, and the poor, middle class, and elderly who’ll suffer most.

All you MAGAnificents... be very, very careful what you wish for. That Mr. Trump’s Wild Ride you’ve been on is enriching his ginormous ego and his wallet at the expense of your health care. And perhaps, your life. Remember Sarah Palin’s “death panels?” Well, they’re back, and this time they’re real. The lives of the poor, the elderly, and the sick are now in the grubby little kleptocrat hands of Trump and his Republican band of thieves. And you voted for them all! Time to get angry, people.

There’s still time to protect yourself and save your insurance. The impulsive, petulant, selfish children in the House may have rushed through Trumpcare without hearings, the critical bipartisan CBO score, or any expense estimates (astounding since healthcare comprises 1/7th of the total U.S. GDP), but the adults in the Senate, where the math and the consequences are way different, will likely kill Trumpcare on its arrival and write their own bill which looks vastly different while preserving much of the ‘good stuff’ from Obamacare.

So what do you do now? Call your Senator. Especially the Republicans. And demand they undo that horrible one-night stand...ya know, the one where ya woke up next to Donald Trumpcare.

Posted by The Ostroy Report at 7:10 AM