It Doesn't F**king Matter What Obama Does! 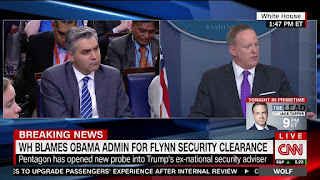 TV News Host: But don’t you think that America is at risk when President Trump divulges top-secret classified info to the Russians?

This is the point where I throw my shoe at the TV and usually scream “What the fuck does it matter what Obama did or didn’t do, Jeffrey Lord!? (or Paris Dennard, Kayleigh McEnany, Jason Miller, etc). Trump is the fucking president now!”

Let me be very clear, Trumpsters: it...doesn’t...fucking...matter. Obama’s gone. He's not the president anymore. The guy you voted for is. You insufferable, horribly disingenuous Stepford Wife-like defenders of the Vag-Grabber-in-Chief really need to learn how to defend his abhorrent behavior without citing something similar you think Obama did. Even if Obama is guilty of everything you claim (which, of course, he isn’t), it still doesn’t matter. If Trump puts America’s security at risk by taunting Kim Jong Un, but Obama once slaughtered a litter of puppies with his bare hands, it...still...doesn’t...fucking...matter.

Didn’t they all vote for Trump because they hated Obama? Thought he was a horrible president that did everything wrong? Didn’t they elect Trump because he was different? The exact opposite of this ‘weak, crooked, terrorist-appeasing Kenyan anti-colonialist non-citizen’? A brilliant, successful bizman outsider who was going to bring a fresh new approach to governing amid the existing “swamp” that was paralyzing Washington? So what’s the first thing they do when their guy’s caught slithering around the bottom of the swamp with his tiny hands in the vag-jar? They point to something Obama did.

When they do that they’re essentially saying, “Yeah, we know our guy is a crooked dumbass, but so was Obama.” What happened to Trump being different? Better? A swamp drainer? Instead, they justify and excuse his myriad gaffes and offenses because the dude they hate was ‘just as bad.’ Am I missing something?

And they do this while Trump’s also reneging on every campaign promise and lying to them 24/7...AND giving away secrets to Russia...AND offending/endangering our allies...AND obstructing justice...AND taking away their healthcare...AND...AND...AND. Ignorance is in fact bliss.

Donald J. Trump is president. Not Obama. The colossal shitstorm that’s blown through the White House since January 20th is all on him. All due to his unprecedented, cringe-worthy words, deeds and unforced errors. Nothing Obama did, said, thought, wished, wrote, mimed, improv’d, or sang matters. Defend Trump if you must, but do so without mentioning Obama’s (or Hillary Clinton’s) name. Try it. I know it’s incredibly difficult. I bet ya can’t...
Posted by The Ostroy Report at 12:29 PM