Does Everything Have To Be Partisan? 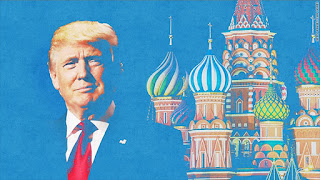 There used to be a time when Republicans were the tough-talking, patriotic, red-baiting, Democracy-defending standard-bearers. Not anymore. Partisanship no longer ends at our shores. These days the GOP and its kleptocrat commandant Donald Trump act more like tools of the Russian government. Like they’re on Vladimir Putin’s payroll. Like...maybe...possibly Putin has something incredibly incriminating on them (hooker pee pee tapes, money laundering?). Because there’s no other explanation for this sudden shift to anti-American behavior.

Seventeen United States intelligence agencies have unanimously concluded that there was Russian interference in last year’s election. Within the Trump administration, several key former and current advisors and cabinet members—including Michael Flynn, Paul Manafort, J.D. Gordon, Carter Page, Roger Stone, Jared Kushner and Attorney General Jeff Sessions—have held clandestine meetings with Russian officials, including Ambassador Sergey Kislyak, before and after the election. While the issue of lifting U.S. sanctions is suspected as being the primary subject, the bigger issue of interference in the election and possible Trump campaign collusion is now the subject of House, Senate, FBI and special counsel investigations.

For the past 18 months Donald “I Love Wikileaks” Trump has fed this conspiracy theory with unyielding acceptance and/or support for anything Russia may have done to impact the outcome of the presidential election. He’s maligned our intelligence community and, conversely, has heaped praise on a murderous dictator like Putin (a “strong” leader”). Further, he’s done everything in his power to obstruct the ongoing investigations, including firing former FBI Director James Comey. He recently told NBC’s Lester Holt:

“And in fact when I decided to just do it I said to myself, I said, “You know, this Russia thing with Trump and Russia is a made-up story, it’s an excuse by the Democrats for having lost an election that they should’ve won.”

The very next day Trump hosted Russian diplomats in the Oval Office where he mocked and demeaned Comey, telling the Russians:

"I just fired the head of the FBI. He was crazy, a real nut job. I faced great pressure because of Russia. That's taken off.”

Trump’s denied, discredited and disrupted the investigations incessantly on Twitter, and has impugned the integrity of our free and open press, calling it “fake news” 24/7 while showering Fox News (aka Trump Propaganda Network) with accolades and access.

And the circus just added more rings this week. During his testimony before the Senate Intelligence Committee Tuesday, Sessions repeatedly stonewalled and suffered epic bouts of short and long-term amnesia when asked by Democrats about conversations he had with Trump over Comey’s firing, and whether it was related to RussiaGate. He did not invoke executive privilege nor did he claim it was classified information, nor could he offer up any legal basis for refusing to answer the questions.

“I am protecting the right of the president to exert it if he chooses," Sessions disingenuously repeated.

So... Sessions was not answering questions because of the ‘executive privilege’ neither he nor Trump had invoked. Even more incredibly, he also stated he had not been briefed on the Russia investigations, yet was certain no one on Team Trump colluded. Not bad for a guy with massive memory loss.

Which brings us to Republicans in Congress. Those spineless, self-serving oligarchs who’ve sanctioned and encouraged this unconscionable anti-American, potentially treasonous behavior from the Trumpsters. The ‘equal branch of government,’ responsible for oversight and checks and balances, is acting like paid lobbyists for the president. The word ‘accountability’ means nothing to them, even if it undermines the very thing that makes our democracy so great: free and fair elections.

It is widely believed that last year Russia’s ‘influence’ was limited to email leaks and fake news. In 2020 it could include actual tampering of voting machines...materially impacting the ultimate vote count and thus who gets to sit in the Oval Office as a true Putin puppet.

But make no mistake: Russia has been and is perhaps America’s biggest global threat. It’s an enemy state which seeks to destroy democracy throughout the world. Judging from our chaotic transfer of power these past five months, Putin’s already succeeding. And while Trump’s deluded himself into thinking Putin’s his buddy, the truth is the Russian president will eventually go after him...if he hasn’t already (which might explain Trump’s bizarre deference to-date). Putin doesn’t see left or right. Just Russia. The existential threat from another, more invasive Russian attack remains. Our democracy’s been attacked, and Republicans just don’t seem to care.

More mystifying is the behavior of Trump voters—the xenophobic, Confederate flag-waving “USA! USA! USA! crowd who pre-Trump would be calling for the execution of anyone colluding with Russia—who’ve suddenly had such great affection and admiration for Putin and our new pal Russia.  “Why can’t we be friends, why can’t we be friends...”

None of it makes any sense whatsoever. America seems under siege, from within...

Posted by The Ostroy Report at 2:26 PM