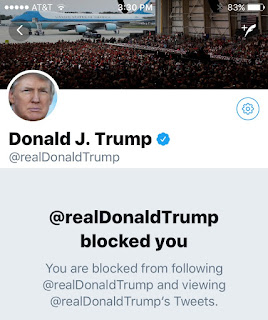 I’ve arrived. I am part of an incredibly small minority of Americans who I call “The Blocked.” I share this badge of honor with other folks who go to sleep every night with a huge smile on our faces knowing that we got under the extremely thin skin of the President of the United States. That our words matter. That they matter so much that Donald Trump can no longer fathom seeing them anymore. So he blocked us.

As personally gratifying as being blocked by Trump is, is he violating our Constitutional right of free speech and dissent? According to a recent story in Forbes:

“Because the @realDonaldTrump Twitter account is open to the public through which a public official discusses official public policy, Trump should not be able to limit public access to this forum in which vital information is disclosed and discussed. Legally, the president cannot exclude certain people from such a public forum simply for expressing conflicting viewpoints or criticism that he dislikes.”

In a letter sent to the Trump Administration earlier this month, the Knight First Amendment Institute, which is representing some members of The Blocked, stated:

“This Twitter account operates as a 'designated public forum’ for First Amendment purposes, and accordingly the viewpoint-based blocking of our clients is unconstitutional. We ask that you unblock them and any others who have been blocked for similar reasons.”

The letter hinted at a possible lawsuit if Trump does not comply and continues blocking detractors.

There’s even a new web app, TrumpBlocks.me, which catalogs The Blocked, tracks the newly shunned and could be an important element in future First Amendment protection litigation. The definitive collection of those whose Constitutional rights have been violated by the president.

As for The Blocked, rumor has it that there are only about three dozen of us. That’s a very exclusive club if true. But I suspect there’s more. But no matter the tally, we hold our heads high with pride and deep, deep satisfaction. We’re the people who’ve relentlessly fired off 140-character missives at the Manbaby-in-Chief in response to his draconian policies, sexist and racist behavior, and general campaign to make America really ugly again.

But he can’t handle my tweets, which apparently riled him so much that they became the subject of discussion in his social media war room. Either that or Trump himself, during one of his late-night/early morning Twitter rants, got so pissed at my prolific digested smackdowns that in a fit of rage he banged his tiny little finger on the “block” button. Either way, I’m quite flattered.

To be sure, the self-styled “counter-puncher” emotionally crumbles like a petulant toddler at the slightest challenge, criticism or perceived attack. He thinks the world revolves around him. He believes everything he says and does is so colossally amazing. And he so desperately needs the rest of us to agree with him. He’s a spoiled manchild who viciously retaliates when we don’t.

It’s all a facade though, as in actuality, I think Trump hates himself. I think he knows what a bigly douche he is more than we do. That’s why he blocks us. We’ve forced him to face who he really is: the most ignorant, unqualified, illegitimate president in history. It’s also why he can’t stop re-litigating the election; refuses to acknowledge what everyone else in the world accepts as Russian hacking of that election; and why he can’t stop bashing Barack Obama, a man who has more intelligence, class, dignity, grace, humility and diplomacy in one strand of hair than Trump has in his entire being.

Trump the candidate presented himself as the big, tough, terrorist-fighting, crime-busting he-man. A commander-in-chief who’ll rid the world of ISIS, battle brutal dictators such as Bashar al-Assad, Kim Jong Un and Vladimir Putin. But in truth, the admitted pussy-grabber is himself just a pussy who can’t even handle the Twitter musings of a snarky liberal blogger.

And by the way, the thin-skinned apples don’t fall far from that sensitive tree. Don Jr, Eric and Ivanka have blocked me too...