Republicans Voting Against Their Own Interests: It's the Hatred, Stupid... 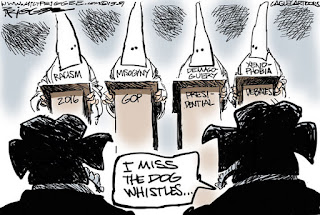 In his recent NY Times op-ed (”What's the Matter with Republicans?”) David Brooks asked, "Why do working-class conservatives seem to vote so often against their own economic interests?" It's an excellent question relating to a truly inexplicable phenomenon. But I disagree with Brooks' thesis that it's primarily attributable to anti-government fervor. The truth is much uglier than that.

The Republican party, and most recently Donald Trump, have perfected the art of playing to the lowest common denominator of the GOP's base which, over the past several decades, has fully succumbed to a toxic cocktail of ignorance, intolerance and hate.

Just as Trump's perfected the art of demagoguery—scapegoating immigrants, Mexicans, women, the judiciary, the intelligence community and the media—to brainwash his followers while stoking their anger, sexism and racial animus, the GOP has also historically used abortion, religion, guns and gay marriage as smokescreens to deceive those who voted for them and who most need their economic help.

The party has succeeded in diverting these voters' collective attention away from the issues that should matter most to them—jobs, education, healthcare and the environment, for example—instead harnessing their most basic, primal fears and insecurities and converting them into invaluable political capital.

In Trump’s 2017 America, the media is “the enemy of the people” while a brutal dictator-wannabe from a hostile nation like Russian President Vladimir Putin is a revered world leader who’s allowed to hack into and influence our elections. It’s an America where an attack on our Democracy is more tolerable than an attack on our megalomaniacal president. Where anger, fear and hatred trumps facts and the truth.

Republican voters claimed to want change. More jobs, better education, affordable healthcare and housing and to ‘make America great again.’ But instead they’ve allowed themselves to be exploited and dragged into Trump’s self-destructive rabbit hole.

The likelihood is that this bait and switch will continue until poor and middle class Republican voters realize that their fear and hatred has made them complicit in the longest-running con game in political history.
Posted by The Ostroy Report at 1:31 PM