A Presidency Under Siege 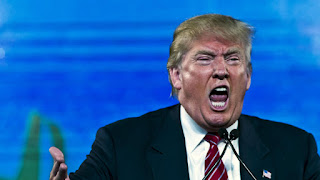 The presidency of Donald J. Trump is under siege. It is being held captive by the megalomaniac, pathologically-lying, self-destructive president himself. It’s not the ‘sore-losing obstructionist Democrats’ who are undermining Trump. It’s not the ‘enemy of the people fake-news media’ who is out to get him. It’s not “crooked Hillary, cryin’ Chuck Schumer or sleazy Adam Schiff.” No one but Trump has doomed his colossally failed presidency.

To borrow from Trump’s dishonest, manipulative rhetoric about Obamacare, the U.S. presidency is collapsing under the sexist, racist, hate-filled, do-nothing weight of the bloviating maniac at the top of the shit pile. The “I alone” president has fulfilled his biggest campaign promise: he’s totally fucked things up all by himself.

While Trump loves bragging about his massive accomplishments during his first six months in office, reality is quite the opposite. His is a presidency mired in controversy and scandal. A presidency under House, Senate, FBI and special counsel investigation. A presidency with not one single major piece of legislation passed (by contrast Barack Obama had the economic stimulus; the Lilly Ledbetter Fair Pay Act; and was creating what would soon be the Affordable Care Act). A presidency paralyzed by internal leaks and staff infighting, defections and shake-ups. A presidency facing possible impeachment and indictment. A presidency already reviewing the legality of pardons, even for Trump himself. A presidency with a dreadful 36% approval rating, the lowest in history.

We have a president driven by an insatiable need for attention, praise and loyalty even at the expense of the United States and its citizens. Who chooses to demean and undermine his cabinet members, staff and surrogates publicly. A no-character coward who hides behind 140 characters on Twitter when attacking his opponents instead of facing them like a real man. An impulse-challenged Manchurian Manbaby who surrounds himself with yes-men and sycophants like his new mini-manbaby communications director Anthony Scaramucci. A president with a disdain for the rule of law. Who thinks he’s above the law. Who may be guilty of obstruction of justice, collusion, treason and who knows what else.

And now we have a president who, amid several ongoing investigations into the campaign’s possible role in Russia’s hacking of last year’s election, is contemplating firing Attorney General Jeff Sessions after having fired FBI Director James Comey. Unconscionable actions which make Richard Nixon’s Watergate crimes pale in comparison.

To be sure, Trump’s main priority is his unrelenting Tweet’nado to deny, distract, deflect, demean, disrespect and discredit RussiaGate and the investigations. He’s become increasingly paranoid, desperate and emotionally unglued. It’s as if he knows the Feds are closing in. The presidency is spinning out of control and paralyzing not just Trump, but is keeping the Republican-controlled Congress from pushing its agenda through as well.

“He’s a chaos candidate and he’ll be a chaos president,” Jeb Bush famously predicted during the campaign.

The big question now is, how much longer Senate Majority Leader Mitch McConnell and House Speaker Paul Ryan will ride Trump’s reckless roller-coaster before it jumps the track and destroys them all...

Posted by The Ostroy Report at 2:25 PM

How much more of this idiot President can we take? The bigger question is how much longer will the GOP stand behind their leader, a person that they are constantly defending and covering for? Ever since Trump has taken office it has been one embarrassing lie after another, and yet when the GOP leaders are questioned on it they try to sugar coat it or avoid the question all together. Everyday this moron of the White House tweets crap that never says anything positive, only blasting someone or some bill he doesn’t like. Now it’s the trans in the service that is his hot button, what will it be next week, and the week after that? He knows that his neck is getting closer and closer to the noose of his connections with Russia, and he knows that when his tax forms are looked over his jig is up. He knows that Mueller has the power to go after his tax forms now that there is a connection between him and Russia. When it all comes out, and it WILL, this man-child of Pennsylvania Avenue will wish to hell he never had even thought of running for the White House, because he’ll be serving time in the Big House.