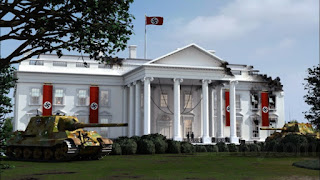 “Trump and Hitler.” I wrote this piece almost two years ago. I saw the handwriting on the wall. It was crystal clear. But it wasn’t a popular comparison back then. Maybe it was denial. Who could think that America could actually be overtaken by a president who by his words and deeds appears to not merely support white supremacists, neo-Nazis and the KKK but, worse, instigates them and covets their votes. But here we are, America. And the concern of two years ago has turned deadly.

Heather Heyer, 32, lost her life this past weekend. She was murdered by a white nationalist sociopath who sped his car into a crowd of anti-fascist protestors at the University of Virginia campus in Charlottesville. She was protesting against angry, hate-filled, shield-wearing, weapons-brandishing white supremacists who’d organized a “Unite the Right” rally, marching through the streets carrying lit torches while chanting anti-Semitic, racist slogans including “white lives matter,” “you will not replace us,” “one people, one nation, end immigration” and “blood and soil,” (a Nazi Germany hate slogan) while violently attacking anyone who got in their way. It was a terrifying spectacle. Heyer was killed in a clear act of domestic terrorism shrouded in images which invoked the horrors of Nazi Germany and the deep South 50+ years ago.

Trump spoke out hours later, but not without generating controversy, and bi-partisan criticism, with his choice of equivocating language:

“We condemn in the strongest possible terms this egregious display of hatred, bigotry and violence on many sides, on many sides.”

It didn’t take long for hate-groups to respond favorably:

“I would recommend you take a good look in the mirror & remember it was White Americans who put you in the presidency, not radical leftists.”

This would’ve been the perfect moment for Trump to not only denounce Duke, the KKK and white supremacists, but to clearly state that he neither wants, seeks or will accept their support. But he does. And he thrives on their adulation.

A clear example is the praise heaped on Trump by the the neo-Nazi website The Daily Stormer:

“He didn’t attack us. He just said the nation should come together. Nothing specific against us,” wrote Andrew Anglin, the website’s founder. “No condemnation at all. When asked to condemn, he just walked out of the room. Really, really good. God bless him.” (for the record, I suspect Jesus would be outraged by this despicable racist behavior).

Donald Trump is no stranger to racism. His father was a KKK sympathizer. His father’s real estate business, as well as his own, were investigated and charged with racial discrimination. He was a public agitator during the racial tension of NYC’s infamous Central Park Five rape case. He gave birth to the racist birther movement against Barack Obama. As a presidential candidate he launched his campaign with an unconscionable attack on Mexicans and ran on a “Make America Great Again” theme (code for make America “white” again). He’s re-tweeted hate groups. He’s incited violence at his rallies and made outrageous comments like “Look at my African-American over here!”

And now Trump, who relentlessly attacked President Obama for failing to use the term “radical Islamic terrorism” cannot or will not himself specifically call out and condemn white supremacists, neo-Nazis, the KKK and Duke. Because he likes what they’re doing and needs and wants their continued support. Trump is creating racial animus and then exploiting the turmoil for personal political reasons. He’s ripping apart the nation, stoking the flames of hatred to feed and preserve his 33% base.

As we’ve seen countless times, Trump, who’s so capable of clear condemnation of anyone he feels threatened by—including Rosie O’Donnell, Arnold Schwarzeneggar, Megyn Kelly, Khizr Khan, Chuck Schumer, Mitch McConnell, Jeff Sessions and even the Pope—is verbally neutered when it comes to white supremacists. This is a simple binary choice: he’s either with or against racists. Period. No equivocating. But yet again, Trump is making his choice clear.

The irony of Trump’s presidency is that the phrase “Make America Great Again” has become a self-fulfilling prophecy. The land of hope and dreams has become the land of intolerance and hatred. “Give me your tired, your poor, your huddled masses yearning to breathe free” is now “Blacks, Jews, Mexicans, Muslims, Immigrants, gays... get the fuck out.” And against the backdrop of this past weekend’s violence in Charlottesville, the White House is starting to resemble the New Reich Chancellery... a racist headquarters for Trump and his alt-right nationalists Steve Bannon, Sebastion Gorka and Stephen Miller.

Trump’s view of himself, and his vision for America, runs counter to everything we stand for. The damage he’s causing the presidency and the nation may now be irreparable. At the very least, it will take many years to undo.

To be sure, Trump is woefully unfit for the job and poses a grave threat to the Constitution and our national security. Whether through impeachment, the 25th Amendment and/or indictment, Trump must be removed from office before the situation worsens. Before there’s more violence and death. Before America devolves into a banana republic. That responsibility largely belongs to Senate Majority Leader McConnell, House Speaker Paul Ryan, Vice President Mike Pence and special counsel Robert Mueller. But it’s also incumbent upon journalists to report the facts and expose the lies. And the public must become more engaged, outraged and demanding of a change in leadership. Only then can America achieve greatness again.

Posted by The Ostroy Report at 8:00 AM