A Message to Trump Supporters 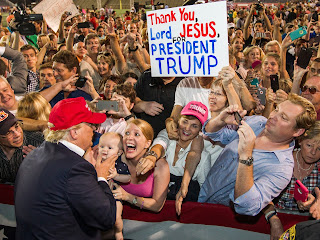 Donald Trump once infamously said "I could stand in the middle of 5th Avenue and shoot somebody and I wouldn't lose voters." Well, after standing by him during his controversial eighteen month campaign and his chaotic seven-month presidency, you’ve proven him right.

I’m beginning to believe that there’s nothing Trump could do or say, not a damned thing, to lose you. That your anger, resentment and, yes, racism, is so overpowering that you’d somehow find a way to defend anything he says or does. Anything.  Even if he shot someone in the middle of 5th Avenue.

“That nun deserved it!” we’d hear you say.

“Did you see how that baby threw his pacifier at Trump!? It was self-defense!” you’d shout.

During the campaign we witnessed Trump’s inner demons in full view. He began with a vile racist attack on Mexicans. What followed were merciless attacks on anyone he viewed as opposition or a threat, including the disabled, war heroes, Gold Star families, beauty pageant winners, judges, our allies and even the Pope.

Then the infamous pussy-grabbing tape emerged, in which Trump admitted to sexually abusing women. Your response? You went to his rallies wearing “He can grab my pussy anytime!” t-shirts, with an arrow pointing towards your cooches. You agreed with him that it was just “locker room talk.” You rationalized that he just talked about assaulting women, but he never actually did it.’

And despite all this you elected him president.

You then watched as he disparaged the intelligence community.

You watched as he attacked the independent judiciary.

You watched as he said our free and open press is “the enemy of the people.”

After decades of being staunchly anti-Russia and perceiving them as an existential threat to America, you’ve condoned the U.S. president colluding with them to steal an election; undermine our democracy; and obstruct justice to cover it up.

You have no issue with Trump firing FBI Director James Comey and Attorney General Sally Yates, and publicly denigrating special prosecutor Robert Mueller, over investigations into his possible treasonous behavior.

You voted for him because he was supposed to be such a great businessman—a super dealmaker— who’ll run the country like his company and attract the best people. Who’ll give you ‘so much winning your head will spin.’

And then you watched all the resignations and firings, including Comey, Yates, Preet Bharara, Michael Flynn, K.T. McFarland, Katie Walsh, Reince Priebus, Sean Spicer, Anthony Scaramucci, Steve Bannon. Never before in presidential history have we had this level of departures in such a short amount of time. Yet you still think he’s a great businessman who picks great people despite the increasing chaos in the White House.

You’re oblivious to the nuclear war that could result from Trump’s juvenile bickering with that other petulant manbaby, North Korea’s Kim Jong Un.

You watched as Trump lied to you and broke campaign promise after campaign promise. No wall. No Muslim ban. No Obamacare repeal. No “ripping up” the Iran deal. No pulling out of NAFTA. No releasing of his tax returns. No divesting of his business.

You love that he “drained the swamp,” but have allowed him to fill the White House with it.

You cheered like sheep as Trump relentlessly criticized Barack Obama for his frequent vacations, yet have no issue with him spending more than a third of his time vacationing.

You manically chanted “lock her up!” as Trump viciously attacked Hillary Clinton, yet continue to enable his blatant corruption.

You stood silent as Trump defended white supremacists, neo-Nazis and the KKK. You seem totally fine with him equating genocidal maniacs with those who protest against them. You and your sons and daughters are the people who patriotically serve our military and fight our wars, yet you’ve allowed Trump to convince you that ‘violence against Nazis’ is unjust. That there’s some “very fine people” in those fiery torch-bearing gangs of thugs who chant “Jews will not replace us.”

And now you’re watching the real, long-overdue beginning of Trump’s end, as anyone with a brain is either abandoning him or about to soon. This includes key Republicans such as Sen. Bob Corker, Sen Tim Scott and Sen. Lindsay Graham; the business community; evangelicals; the arts community; and charitable organizations who are cancelling events at his Mar-a-Lago resort.

You’re witnessing Congress oppose him, the military disobey him and rebuke his racist rhetoric, and 67% of the country reject him.

Despite all this you are still supporting a man who is woefully unfit for the job. Who in the past seven months has become completely unhinged. Who has no discipline or impulse control. Who has the patience, attention span and maturity of a 5-year-old. Who grabs vaginas, is in bed with Putin and kisses Nazi ass. Who lacks a moral compass and is therefore utterly lost as he navigates his way through humanity and the toughest job on the planet.

So then, what would it take for you to bail? Can he actually shoot someone? Would that do it? Would that be your moral line in the sand? That we even have to ask at this point is astonishing.