WTF is Wrong with You, Trump? 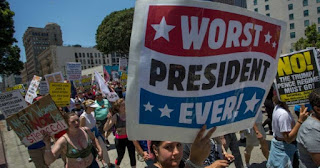 Seriously...what the fuck is wrong with you? Nazis? Really? Nazis? This was supposed to be a textbook slam dunk. A no-brainer. A political gift. Repeat after me: “Nazis are genocidal maniacs, I unequivocally condemn their actions, and I do not want their support or votes.” See how easy that was? But instead you gave us: ‘Nazis and those who fight them are the same’ and ‘There’s some very fine Nazis out there!’ I would say you’re tone-deaf but that would be a grammatical miscarriage.

Your psychological pathos runs much deeper though. You are incapable of distinguishing right from wrong. Of intuitively knowing what not to say, and when not to say it. Of feeling empathy. Of thinking or caring about anyone but yourself. Not your family, your fellow Americans or citizens of the world. You’re an immature, self-consumed megalomaniac lacking discipline and impulse-control. You’re monumentally insecure, self-loathing and capable of feeling good only by hurting others. You’re self-destructive and you pose a grave existential threat to the rest of us. You are a menace to society. A disgrace to America. A stain on the office.

We saw the Defense Department reject your unconscionable transgender policy. We saw Congress reject your Obamacare repeal. We saw all four Joint Chiefs this week reject the racism you so comfortably embrace. We’re seeing key Republicans including Sens. Bob Corker, Tim Scott and Lindsey Graham condemn you. We’re seeing corporate CEO’s abandon you. We’re seeing major organizations including the American Cancer Society and the Cleveland Clinic cancel planned events at your Mar-a-Lago resort. We’re seeing the public reject you. Your approval rating is the worst in history. Get used to it. This is just the beginning. You’re the “I alone” president who’s being soundly rejected by everyone except your misguided, hate-filled “I can shoot someone in the middle of 5th Avenue” crazies.

Your days are numbered. It’s quite possible that your Nazi blunder alone will do you in. It may take time, but it’s hard to fathom you being able to govern after that. But then there’s RussiaGate, and the likely fact that you’re guilty of collusion, obstruction of justice and maybe even treason. I sleep soundly every night knowing that you’re losing sleep over Robert Mueller’s investigation. He’s your boogeyman, and he’s comin’ to get ya.

RussiaGate. And Nazis. Can’t forget those ‘very fine’ Nazis. Face it, it’s not pretty, Donnie. The Feds are closing in, and that terrifies you. And now you smell a rat in Congress. You know damn well that Senate Majority Leader Mitch McConnell (ya know, the guy you mercilessly bashed recently on Twitter) and House Speaker Paul Ryan are huddled behind closed doors white-boarding the options to kick your unfit, racist ass to the curb. I’d also keep my eye on Brutus Pence. With an insatiable hunger for the throne himself, he’ll be stabbing you in the back in due time.

Whether it’s the 25th Amendment, impeachment or indictment, I think you know the end is near. Best to make like Richard Nixon and resign. New York awaits you with hermetically-sealed arms...