The King Returns to Graceland, and his Japanese Sidekick Rocks the House 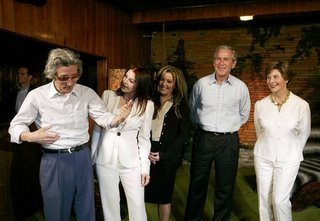 George W. Bush, to some, may be the guy you want to have a beer with. But Japanese Prime Minister Junichiro Koizumi is definitely the guy you want to Karaoke with. On a pilgrimage to Graceland, with Priscilla and Lisa Marie in tow, Koizumi did his best impressions of the King, Elvis , while that other king, George, stood idly by looking stiff as a board and completely without humor.

Koizumi's an Elvis fanatic, and called his visit to the mansion "a dream come true." He's erected a statue of the King back home, and the two share a birthday, January 8, as well as some pretty thick funky rock star hair. Throughout the tour, Koizumi shaked, rattled and rolled his way through the mansion, savoring every moment, especially in the famed Jungle Room where, to the horror of the tour guide, he donned an original pair of Elvis' oversized gold shades before crooning "Love me tender, love me sweet." Koizumi continued with "Wise men say, only fools rush in ..." while Priscilla looked at him as if he was the fool who had just rushed in.

"We need a karaoke machine," she then joked. "Hold me close. Hold me tight," Koizumi sang to her. He then bent down and simulated strumming a guitar, Elvis-style, and sang "Glory, glory, hallelujah." This whole scene would've given great inspiration to Salvador Dali. All the while, Bush looked as if he'd rather be home watching John Kerry's home movies.

Admittedly, we got caught up in the Elvis fever this week as well. In honor of the King, we thought we'd list a few of his tunes here with some little known anecdotes. Enjoy:

"Don't Be Cruel": Sung by the Guantanamo Detainees Quartet
"Heartbreak Hotel": The new hit single by Duke Cunningham & the Watergates
"Jailhouse Rock": Scooter Libby gets his freak on
"Hound Dog" ("you ain't never caught a rabbit and you ain't no friend of mine"): Sung by Harry Whittington to Dick Cheney
"Fools Rush In": Sung by the Brooks Brothers Riot Boys
"G.I. Blues": George W. Bush's favorite war song, as in "G.I. Wish I had had the Balls to serve in the military during Vietnam"
"Guadalajara": Bush confuses this song with having something to do with Guantanamo
"His Hand in Mine": Bush's musical homage to Saudi Crown Prince Abdullah
"My Way": A song about Bush's leadership style
"Kissin Cousins": Ken Mehlman sings about Southern Republican voters
"I Want You, I Need You, I Love You": Scott McClellan's love song to Jeff Gannon
"Long Legged Girl (With a Short Dress on)": Rove's love song to Ann Coulter
"Puppet on a String": Rove's love song to Bush
"Tutti Frutti": the Ken Mehlman opus
"Make the World Go Away": What Bush sings to himself every night before bedtime
"T-R-O-U-B-L-E": the GOP's midterm election theme song
"Fairytale": A catchy little tune about a president who actually thinks he won two elections
"Witchcraft": a song about how Bush actually won two elections
Posted by The Ostroy Report at 6:32 PM

G'day there in the good 'ol U.S. of A....from Australia!
What a damn pity you have a man there who dares to call himself a President, and who obviously does not know the two best Elvis songs that he should learn, and learn he must!
"Clean up your own back yard" and of course one for him and his Dad,
"Don't mess with the U.S. Mail"

The pride of world leaders whoooah? While the northeast states deal with flooding, this jackass decides that a trip to
Graceland is more important....what an embarrasment!

Laura needs a fashion consultant. All of her pant suit jackets are too short for her body shape. Oh, for the days of Jackie; and of course, Jack.

Good eye. Priscilla looked some what uncomfortable around the Elvis nut and seemed to go out of her way to ignore Bush and his boyfriend killing wife Laura. Priscilla has had to put up with alot of'em most of her life and can probably see a fanatic retard coming at her a mile away. I'll bet her and her daughter wet themselves laughing behind closed doors when the other shitheads left, thinking what kind of dorky people run government's. At first I thought , well , perhaps he'd been drinking and Bush did keep looking at him as if he found a long lost bar stool buddy. Theses bozo's rank high on the idiot scale, but leader's, much like music and movie stars are for the most part a little touched in the head area.

I apologize that I'm not responding to this article. I am a new reader of this blog so I read all of the articles. Someone responding to the Coulter article mentioned NWO. I asked what NWO stood for but it's likely that no one but a newcomer will read the Coulter piece now. Will someone tell me what NWO stands for? Thanks.

I "Googled" it and found out it is supposedly a group called NEW WORLD ORDER which involves a group of many powerful people in our country (The Bushes, Moon, Falwell) who are planning some kind of take-over to re-arrange the way things are now. Very dangerous and subversive according to several sites I found. Surprised I never heard of it before, if the sites are true.

King George completely without humor? From the picture, it looks like he has at least a half-ass smile.

"J" is obviously another Republican who is visiting this site. Why would any bona fide Democrat vote for Lieberman-Republican-Lite who is becoming more Republican-Regular all the time?