While the Busheviks Continue Their Propaganda, Iraq Sinks Lower into Civil War 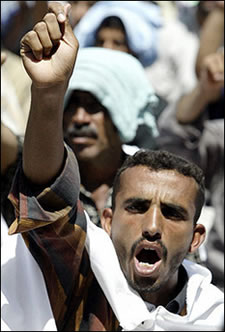 President Bush is succeeding in making the same mistakes "dad" did back in 1992 when he appeared embarrassingly out of touch with Americans over the economy. This time, Junior's not only showing economic delusions--as in bragging about a near $300 billion deficit this week--he's also shockingly out of touch on the war. While Bush, Cheney, Rove, Rice, Rumsfeld, Gen. Pace and others like to cite "progress and success" in Iraq at every possible turn, the country is hemorrhaging with sectarian violence and is out of control. Anyone who doubts that a civil war is underway is either in serious denial or is lying through their big Republican teeth.

But while the Busheviks stick their heads in the sand and regurgitate the "progress and success" rhetoric, the events on the ground spell disaster. A series of suicide and car bombings, random shootings and mortar attacks in the last several days have left over 100 Iraqis dead. Fifty people alone were killed Tuesday. Sen. Joseph Biden (D-DE), ranking member of the Foreign Relations Committee, cited Sunday's killing of over 40 Sunni Arabs by Shiite militia "in broad daylight" in Baghdad, "a city that has 60,000 Iraqi security forces" and "is in tatters. If you don't call that a nascent civil war, I don't know what it is," said Biden, who had made his seventh visit to the violencence-torn country."

From a political perspective, Iraq will likely also spell disaster for Republican incumbents this November. Caught between Iraq and a hard place, the Repugs must decide between toeing the party line and continue supporting the president's "stay the course" policy and face angry voters back home, or break rank and seek an end to this quagmire. Polls show that an increasing majority of Americans do not support the war and want an imminent withdrawal of troops.
Posted by The Ostroy Report at 8:25 AM

This morning I heard Condi Rice once again throw out that incredibly self excusatory line "No one could have expected that..." They treat us like bad children! If they can't remember using such discredited rhetoric they assume we can't!
Sickening and disgusting!

I agree with dicky neely. However, part of the problem now is we, as a country, are acting like children. That the citizens of America are continuing to allow the outrages of this administration and the Republicans is almost unbelievable. What happens in this country is our individual and collective responsbility. We have done nothing. And, can you believe it -- Bush's rating in the polls is rising?

"Polls show that an increasing majority of Americans do not support the war ..."

Pop Quiz: Name one war that a majority of Americans supported.

WORLD WAR II. I lived through it and every American was behind the war, our purpose, our troops and our President. Every citizen gladly sacrificed. Shoes and food were rationed, people bought War Bonds to help pay for the war (I was a teenager and worked to buy a bond which I never cashed I was so proud to have been a help); women left their families to take jobs in plants to manufacture ammunition. Every citizen (or at least the majority of Americans) did something to help the "war effort."

And still there are enough idiot voters out there who would support an enabling repug, giving Dems "only a chance" of retaking Congress. "Let's end the war, but keep the same idiots who don't want to end the war in Congress." GOOD PLAN!

Anonymous said something that made me think. About WWII and everybody being behind the president. I will add something I put in my blog over a year ago.
http://wdrforoh.blogspot.com

If you mention Bush's war for profits in Iraq with VietNam you drive the cons insane. Well, it is not a drive just a short putt. They have no problem comparing Iraq with WWII, DoDah, someone explain that to me. You remember WWII, or at least you saw a movie about it. That was when the Japanese attacked Pearl Harbor, and then FDR invaded Peru.
Remember that was a real war against a real enemy, and everybody got behind our President. No matter how much people disagreed they put their personal feelings aside.
Folks,THAT IS A LIE!!!
Follow the link to read what really happened. It is a long read.