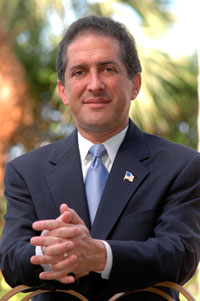 Rep. Clay Shaw (R-FL) is in trouble. The 13-term Congressman from the state's 22nd district is running neck and neck with State Sen. Ron Klein (D)in a race in which the GOP is pulling out all stops to hold onto power. The party's big guns--Bush, Cheney, Rove--have campaigned in the state with Shaw in a desperate effort to save his seat. What's more, Klein's been raising more cash than the Republican incumbent.

The Repugs are scared. "Everyone that you can devote to him, every dollar that you can provide, every vote that you can turn, every person that you can get to, it's important to get it done this year for Clay Shaw," Rove has been urging the party's base. And with good cause. Shaw is one of President Bush's biggest supporters in the House, rubber-stamping his measures 9 out of 10 times. An email from Minority Leader Nancy Pelosi and the Democratic Congressional Campaign Committee (DCCC) warns, "one can only imagine how much special-interest money President Bush and Karl Rove are going to put into this race."

Alan Abramowitz, professor of political science at Emory University, said Democrats have a good chance of gaining at least 15 and possibly 20 or 25 House seats. "Florida's District 22 is obviously one of the Democrats' prime targets," he said. Past elections may be a foreshadowing of things to come in November. In 2004, John Kerry won the district with 52%, while Democratic Senate candidate Betty Castor won 54%. In 2000, Gore took the district 52% to 48%.

Wrote Pelosi: "With Ron Klein as a Democratic candidate, we have the opportunity to change the leadership in Florida's 22nd district. Instead of being home to one of President Bush's biggest defenders, it can be home to a proud Democrat who has led the Florida state legislature. Ron will be the Congressman this district needs; he'll work to make health care affordable, fight for quality education, hold insurance companies accountable, protect the environment, and promote economic development that benefits everybody, not just a select few."

Shaw's biggest vulnerability may be the highly unpopular Medicare prescription drug plan, as the 22nd has the highest proportion of seniors in the country. Klein smells opportunity with this wedge issue, and frequently criticizes the program and its failure to negotiate the lowest prices. Shaw's also a strong proponent of the Iraq war, which, along with Bush's dreadful poll numbers, could spell even further trouble for him in this hotly contested race.

It's coming down to the wire. Democrats have the best chance in 12 years to take back the House, and they're wisely fighting a seat-by-seat war. Klein could very well be one of the 15 Democrats the party hopes to pick up to regain control.

Click here to contribute to the Ron Klein campaign before the June 30th 2nd quarter deadline.
Posted by The Ostroy Report at 9:49 AM

My best to Shaw's opponent Mr. Klein.
The name Clay Shaw rings a bell. Of course it's not the same person but you may recall a Clay Shaw from the former New Orleans DA Jim Garrison's investigation into the alleged conspiracy to assasinate JFK.

My question, also. Is this Clay Shaw related to the Clay Shaw that was put on trial for the JFK assassination? Can anybody enlighten us on this one?

I'm all for Republicans being in election trouble. Their central party theme has run roughshod over the rest of the country. The greed and corruption has taken this country down a few notches in the eyes of the world. That's a sad legacy for GOPs now and in the future.

Alan Abramowitz is a woman?

Do we have to call legitimate issues like gross deficiencies of the new medicare program a wedge issue. Thats insider Republican political talk. It compares a legitimate issue which is in the best interest of the people to stupid issues like flag burning amendments. Did klein actually say, to who ever wrote the article, that he smells wedge issue in the atrocious drug program. Lets not look for wedge issues but legitimate positions in the best interests of people and not a few huge institutions.