The Stevens/Kennedy One-Two Punch on Bush. Every American Wins 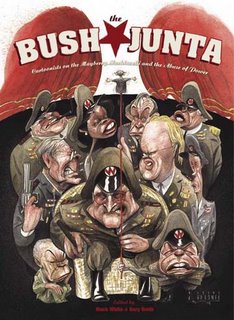 With its ruling that the Bush administration lacks the authority to put Guantanamo detainees on trial before military tribunals, the U.S. Supreme Court has dealt the Busheviks a huge blow in its unprecedented, ongoing quest to expand the president's powers. King George has finally been told he cannot do whatever he wants, to whomever he wants, whenever he wants. Like it or not, he's finally being reminded that America governs under the rule of law and holds sacred the separation of powers and our system of checks and balances. Finally, someone has said, "We will not allow you to defile the U.S. Constitution, circumvent Congress and violate international law."

This is not merely a victory for Salim Ahmed Hamdan, the former Osama bin Laden bodyguard who was captured and sent to Guantanamo in 2002, and who brought the case before the High Court. Nor is it simply a victory for every other Guantanamo detainee who's been mistreated and stripped of his civil rights. It's truly a victory for every single American; every citizen whose Constitutional right of privacy and due process has been threatened since King George assumed his throne in 2000. It's a victory for all of us who believe that the Busheviks have consistently abused and misused power in a way that would make our Founding Fathers cringe. The injustices perpetrated by this administration have gone unchecked for way too long. Let's hope the Court's decision this week is just the first in a series of actions by both the Court and Congress to rein in this dangerous, monarchistic president and his arrogant inner circle.

In its 5-3 ruling, with the majority opinion delivered by 86-year-old Justice John Paul Stevens, the Court reaffirmed that even under times of war the president is bound by the Constitution and the rule of law, as well as the Geneva Conventions, and that he cannot arbitrarily interpret these laws as he sees fit. The Court also held that Congress, in passing its pre-war resolution authorizing the use of military force, did not give Bush a blank check to circumvent the other branches of government and concentrate power in the executive as he wages his open-ended "war on terror."

In "Power Grab", her brilliant and chilling account of the Busheviks' campaign to usurp power which appeared in the June 22 New York Review of Books, Elizabeth Drew perfectly frames the debate by explaining the Busheviks' Constitutional interpretation of the "unitary government" and the "inherent" power of of the commander-in-chief, which they claim gives Bush overriding power over Congress and the courts, thus eviscerating our system of checks and balances and judicial review as decided in Marbury v. Madison (1803). She cites conservatives and liberals alike, concerned that the balance of power has tilted decidedly toward the White House.

Conservative leader Grover Norquist said "If you interpret the Constitution's saying that the president is commander-in-chief to mean that the president can do anything he wants and can ignore the laws, you don't have a constitution; you have a king.... They're not trying to change the law; they're saying they're above the law and in the case of the NSA wiretaps they break it." Pretty heavy stuff for a staunch right-winger like Norquist. He's echoing the sentiments of many Republican pols like Sen. John McCain (AZ) and Sen. Chuck Hagel (NE) as well as a chorus of leading Democrats. In an era of highly partisan politics, the outrage over the Busheviks' overstepping their boundaries has worked to unify many on both sides of the aisle. That Congress has been neutered by Bush is not a partisan issue, and members have been stewing over being stripped of their Constitutional right to oversight.

Since 2000, the Busheviks have operated in virtual secrecy, making up the rules as it goes along. They've circumvented Congress, defied the courts, violated the Constitution and held contempt for the press. They've relentlessly bullied the judicial and legislative branches of government as they've strived to reshape the Constitution and concentrate power in the hands of the president, Cheney, Rove, Rumsfeld and Rice.

To be sure, greed and power corrupts. The Bush administration is a textbook example of that. Perhaps Guantanamo will prove to be our unitary executive's Waterloo; where the Supreme Court and Congress began their battle to rescue the Constitution from Bush and wrest back its equal power. They must, if our Democracy is to once again resemble what the Founding Fathers intended.

In her indictment of the Busheviks, Drew closes with a quote from James Madison, who wrote in Federalist paper No. 47, "The accumulation of all powers legislative, executive and judiciary in the same hands, whether of one, a few or many...may just be pronounced the very definition of tyranny."
Posted by The Ostroy Report at 9:00 PM

Are you sure you quoted Grover Norquist correctly? I can't believe he would say anything as sensible as that!
Boy, the times they are a changing!

I fear the Repubs will steal the election by machine fixing and making it difficult for voters to vote.

We must support exit polls so we can see the vote tally differences.

We were elated at the news of the SCOTUS decision to slap Georgie upside the head! This ruling benefits everyone instead of just the GOP and Bush pirates. Isn't that what this government is all about?

Now if Congress can just get it's act together - edit that to the Repugs get their act together, we'd have something!

Oh wait, we have something already. It's called a democracy.

It's about time Georgie, Dicky, Rummy, Condi, and the GOPy congress figure it out!! J

I will say once again to you (and you never have the courage to respond) that you sing a one note song when it comes to vote fraud: voting machines. You show your hand that you are not interested in fair elections; just winning them. I am all for any kind of audit trail on the machines that you want to throw at them. For exit polls to be valid, though, you would need to poll 100%. Is that feasible? Who is going to oversee the exit polling? So we are going to have people enjoying the privacy of their voting booth and then force them to tell after the fact who they voted for? If they don't want to tell, is less than 100% a valid result? I can just see some union thugs interviewing little old ladies after they come out of the booth asking who they voted for and it better be the right person.

You never want to talk about the other rampant forms of voter fraud that need to be addressed. We need:

- A required state issued photo ID with proof of citizenship. Don't give me this bunk that they can't afford it, but if they can't then pay for those who can't. That would be taxpayer money well spent.
- A centralized national voter database to detect multiple registrations and voting.
- Absentee ballot reform to detect fraud where the actual 'voter' either does not even know of the submission or the 'voter' is too incapacitated to even be aware enough to cast a valid vote.

Good plan, Popeye. Who's going to oversee all the data banks? A neutral governing body or will it be subject to which party is in office?

anonymous, you raise a good point. It is definitely an area that would need to be carefully crafted. The two things that could be manipulated are:

I guess the concept of "neutral governing body" can always be questioned. The only way is to have oversight from both sides.

Until someone gets paid off or has vast interests in e-voting machines and then the corruption starts, AGAIN!

This is important enough to have oversight that is not politically generated or motivated.

While, Sandra Day O'Connor should be ashamed, swing votes from SCOTUS can still be, dare we say it, politically motivated.

So who is going to oversee the voting? Or is it time to oversee a popular vote - 1:1 count, instead of the electorial system in place?

And, now we supposedly have Mexican candidates locked in voter fraud issues in their country.

The underbelly of e-voting really needs to be exposed. Let the ax fall where it needs to go.