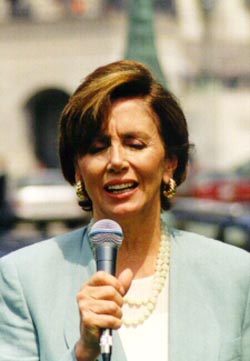 The Swift Boating of House Minority Leader Nancy Pelosi has officially begun. As the New York Times reported this week, the GOP is ratcheting up the fiery rhetoric in a precursor to its likely attack ads this fall on the California congresswoman who's in line to become the next Speaker if the Democrats win the needed 15 seats to take back the House this Fall.

In a new campaign theme to rally its right-wing base, the Repuglican party's painted a bullseye on Pelosi's back that screams wealthy liberal San Francisco counterculture extremist. Pelosi-as-Speaker is not a scenario the Repugs like to think about on a full stomach. RNC Chairman Ken Mehlman said she was neither a "New Democrat" nor an "Old Democrat" but a "prehistoric Democrat."

Keller and his Repuglican cohorts may be in for a big surprise this Fall, as voters could likely reject President Bush, Senate Majority Leader Bill Frist and House Speaker Denny Hastert's contract to destroy America. Recent national polls all show that a majority of voters are dissatisfied with Bush, the GOP leadership, and prefer Democrats on every single domestic and foreign policy issue.

Going into the home stretch, so far we have a Repuglican platform that consists of homophobia, xenophobia, red-neck-baiting flag-burning legislation, stop-Bush's-impeachment, and keep-Pelosi-from-Power themes. And they say we don't have anything to say.
Posted by The Ostroy Report at 11:13 AM

I was disappointed by her when she decided to interfear with the legally executed search for documents in the corruption investigation. Both she and Hastert got all hinky about "their rights"; they should say "special privilage".... it was a legal search with judicial oversite. They can not bring themselves to even talk about illegal wiretapping without judicial oversite. She should get Hastert to talk a bit about the citizens' rights, as their rights should not be any more important than ours.... Where are our checks and balances?

This is why liberals should always be pounding on how it is "conservatism" that is taking the nationa and the world to hell.

The repugs have their cult believing "liberalism" is the crime. The left tries to make out that it is "Bush" or people who are the problem. We are being lead to hell by their ideology. Bush won't be running in '08, yet most of our ammo is used on him personally. Insane.

There are no "good" conservatives. They hate everything this nation has stood for and created the last 200 years.

Conservatism is the child of their "true" savior, their homophobic authoritarian agenda is is his agenda. They are his creation.

Liberals still haven't added two and two to figure out who is behind this. They therefore flail away trying to defaet the wrong targets.

I suppose if Jesus Christ returned today and ran for prez as a Democrat he would become a targe for "swift boating!"
Imagine... "He is a Palestininan radical! He is anti Israel, a socialist revolutionary! He is invoking class warfare! He is definitely anti-capitalism! He is for food sharing programs, he is weak against crime, against capital punishment...and..." well you get the idea.