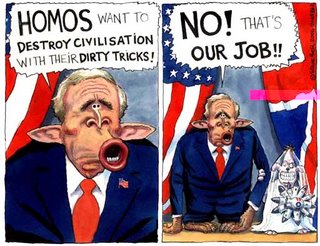 Sorry, Repugs. Two married gays living in Providence has about as much negative impact on heterosexual marriage as a "Queer Eye for the Straight Guy" marathon on ESPN. The constitutional ban on gay unions that conservatives dream of passing someday would do nothing to protect and uphold their precious holy matrimony. But there are several things that these bible-thumping lawmakers can do if they're really concerned about the survival of the great institution of marriage:

2. A constitutional amendment banning spousal abuse: over 4-million women are beaten each year by their husbands. 4000 are killed.

3. A constitiutional amendment banning divorce: 50% of all heterosexual marriages end in divorce.

Collectively, these three sins kill millions of heterosexual marriages each year. To the contrary, Ellen DeGeneres' love life poses no threat at all. If Repugs want to tamper with the Constitution, let 'em do so where it truly counts.
Posted by The Ostroy Report at 8:22 PM

Someone should do a public opinion poll comparison between woman's suffrage, inter-racial marriage and gay marriage to see the trend lines before society accepts what does not harm it.

Dubya's campaign against gay marriage is a good indicator of just how pitiful his wretched administration has become. Were he not such a loathsome boob, one would almost have to feel sorry for him. He has failed at every endeavor...from the war in Iraq with it's non-existent WMD, to his attempt at tinkering with Social Security, to the disastrous failure of FEMA in New Orleans, and on and on from one big mess to another, until he has at last arrived at the basement in an elevator with no "UP" button. What a hapless, contemptible little man he is.

Almost everybody knows that the human being projects on to others that which he fears or is in himself, but isn't consciously aware of it. Therefore when one hates or abuses homosexuals, for example, it's because they are undoubtedly, at the least, latent homosexuals themselves. Why don't the Religious Righters just "get in touch" and "come out".?

There would be less divorce if men would forget the long-standing motto: "Keep them barefooted, pregnant and in the kitchen," That's what's behind much of the abortion protest by men - that's one of the "big three" conditions for controlling their wives. No woman, nor anyone else, likes being controlled.

I agree with your points, but if you've found 50% from a solid source will you site it?

It's a yearly statistic that has stayed constant for years, now. While certain focus groups, age, race, religion, etc, may go up or down, the overall rate of divorces stays at 50 to 51 percent. Depends also on how states report, if annulments are included, and how divorce is handled, ie community property, waiting periods, no fault, etc, etc. Then there are those who file for divorce and never follow through and those that separate and never divorce. Overall, it's about 50 percent of all marriages end in some manner. Since gays can't marry in most states, it would be reasonable to conclude that they don't affect these statistics much. Have you ever looked at it from the standpoints of educational level and religious affiliation. Interesting to say the least...

I'm not gay, but I want to marry my friend for the taxbreaks. We'll stay 'married' until one of us wants to really get married, then we'll divorce.

After my divorce, I plan on becoming Mormon. This way, I can argue that it is my religious right to have 2 wives. We'll pool our money, get some great tax benefits, and have some wild sex parties. Should be fun.

When this gets old, I plan on getting a pet monkey. My question is, how can I legally argue that I am entitled to marry my monkey? Our DNA is 98% identical and I've always wanted to be a monkey grinder. I hear they make great money.

You can at this time marry someone of the opposite sex and get the taxbreaks, or, in NYC, get a rent-controlled apartment; or, you can marry an emigrant who wants instant citizenship for which you can collect money and then get a dirovce. See how our laws smile on you. However, our laws provide equal rights to our citizens, thus to have more than one spouse would deny equality to the other wives or husbands in a marriage. The same goes for the monkey - you obviously just want to force the monkey to work to support you and control and subjugate her or him to your will. Of course, that was the lot of women not too many decades ago but our country woke up to that injustice, as it did to the injustice of slavery. Perhaps one day "your kind" will see other injustices in our country and become a wiser person.

hmmm...marrying someone of the opposite sex does not help my friend - so that option doesn't help.

Marry an emigrant? How would marrying someone that wants to leave my country (and give them instant citizenship?) help and why would they pay me? This is no help.

How would having multiple wives deny equality? I can pleasure all my wives every night using a round-robin algorithm to fairly schedule each wife each night and thus treat them all equally. I can sleep an equal amount in each bed and even allow an equal amount of cheating if they would like an equal amount penises to match my quantity of vaginas. I can love them equally too, but there is no law requiring love in a marriage, is there?

Lay off my monkey dude, I will not force him (or her) to support me. I'll grind, the monkey dances, then the monkey grinds and I'll dance. Fair is fair.

thanks for the advice! Go Democrats!

Man, I don't know why I waste my time answering you. You didn't understand a word or get the point. 1)You said you wanted to marry a man for the "tax breaks." I assured you YOU, who are straight, can marry another for a tax break so why "scorn" a gay for wanting the same opportunity (which was implied in your remarks.)

2,) An immigrant here is someone from ANOTHER COUNTRY, not the USA therefore an American citizen can marry him or her (for money) so he gets citizenship.

3) Getting banged by a husband as often as another woman doesn't constitute equality for a wife. The point was equlity with the husband, not his other wives.

4) Hardly fair to the monkey that she attracts the crowd while you hold her leash. You did imply you wanted to marry the monkey which should ensure equality in the union, at least legally. (The Baptist may have another idea but that doesn't concern our governmnet.)

Hope you find some remedial help.