George Bush a Bi-Sexual Kinkster? We're Offering $5000 for Any Credible Evidence Which Proves He's the Manhandler-in-Chief 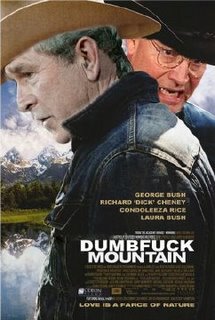 In a week which had the President come out (pun intended) strongly against gay marriage, an explosive new allegation surfaced of a 1984 bi-sexual menage-a-trois involving Bush (pun intended) and another man, Victor Ashe, the current U.S. Ambassador to Poland and Dubya's "special" friend since their cheerleader and roommate days at Yale. I kid you not, folks. This incredible story appears on the Wayne Madsen Report website, as told by Leola McConnell, the woman with the dubious distinction of being the female in the AsheBush sandwich. Crazy, huh? But wait. It gets even nuttier. McConnell also happens to be the current Liberal Democratic candidate for Governor of Nevada. She's also been the purported dominatrix of former Education Secretary Bill Bennett, he of virtue and morality and racial tolerance fame. You can read even more about this unbelievable allegation at bushssecretlifein84.tripod.com/ , The story was all over talk Radio Wednesday, discussed by Air America hosts Rachel Maddow and Randi Rhodes among others.

So, can it be true that George W. Bush is actually bi or, God-forbid, gay? We're not sure, of course, and the above story can only be construed as a titillating case of he said/she said. But it sure would explain a heck of a lot about the man:

Yep, kind of all makes sense, doesn't it? But why speculate? Let's find out for sure. Which brings us to the The Ostroy Report Booty Bounty on Bush. We're offering $5000 for the evidence which proves* (and we do mean proves) that our president is indeed a sword-swallower. A Liza fan. A Nancyboy. Let us know if you think you've got the iron-clad dirt on Bush. It'll be the most patriotic thing you do.

And if nothing else, got to Madsen's site and get a good laugh. Even George W. Bush deserves a good little Swift Boating every now and then.


*disclaimer: we're not talking hearsay, he said/she saids, or circumstantial evidence. We're looking for 100% bulletproof evidence; evidence that not even Dick Cheney could shoot a hole through. We want something akin to the 'money shot', kids.
Posted by The Ostroy Report at 10:13 PM

Oh, imagine my joy if this were true... imagine how incredibly socially naive we'll look in a century... if anybody keeps paying the rent on these Blogs...

yeah, that will happen.

if we're lucky another Howard Zinn will pop up & keep track of our carefully tagged & manicured hunt through their mess... before the CorporateGovernment does the housework...

You left out the "kiss of death" to Joe Lieberman.

Elevating ourselves over the chessboard of deceit makes the burning of our flag pale in comparison to the shredding of our Constitution.

To amend it for politic reasons (wedge issue to further divide) to legitimize discrimination when many faiths already have strictures permitting only heterosexual marriages is tantamount to a hate crime.

The "decider" is not a uniter.

May he be on the receiving end of the affections of a pitbull in endless purgatory. Too late, Cheney has the job!

Add to the mix Jeff Gannon, the gay male prostitute who had 200+ visits to the White House plus being given coveted press credentials contrary to traditional White House policy. And, the penchant for surrounding himself with bald-headed men and his proclivity to rub their heads.

This issue has been brought up before...

Ever wonder why "Lips" was his nickname at Yale?....(for giving it so well, they say)..

And his preference for the use of the word 'fabulous'?...

This and other gay bushisms, including the Ashe reports, are here:

No thank you
We don't want him

Hmmm... I wonder what Jeff Gannon was doing on all those nights he didn't leave the White House? Or WHOM he was doing?

He was probably stealing more silverware for the Clintons.

Do you people not have anything better to do with your time than associate yourselves with nonsense. G.W. Bush is a christian and evidently knows what he doing to be elected for a 2nd term. Get a life of your own and worry more about what Gods will is for your life rather than spreading rumurous nonsense