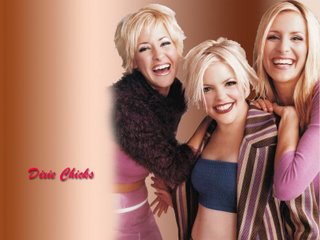 Wanna send a strong message to the Repuglican Party, conservatives and red-necks across America? Go out and buy the new Dixie Chicks album, "Taking the Long Way." Not a country music fan? That's irrelevant. You're a Democrat. It'll be the best, most patriotic $10 investment you could make all year. Despite Repug predictions that the Chicks' career would be over after lead singer Natalie Maines' comment in March 2003 that she "was ashamed" of President Bush, the new album opened at #1 on the country albums chart and the Billboard 200 overall chart, sold 525,000 copies in its first week (100,000 more than industry projections) and is one of the most successful openings of the year. But that's not enough, folks. Let's drive album sales through through the friggin' roof and send a giant Fuck You to these right-wing fascists who wish to control our thoughts, our speech, our lives. At the very least, let's pay Natalie and the Chicks back for having the guts to come out three years ago and put country over career.

Click here to buy the album at BuzzFlash.com and help support a terrific liberal news site in addition to the Chicks.

(disclaimer: this blogger has absolutely no financial interest whatsoever in Dixie Chicks record sales....but wishes he did.)
Posted by The Ostroy Report at 9:25 AM

I am not a country music fan but i love what the dixie chicks have done and are doing....BEING FREETHINKING AMERICANS!! i just sent for 3 cds from Buzzflash because i also love what they have done for reporting and guarding the truth. i will share my dixie chicks cd's with my daughters who will inherit this "bushmess" AS I TOO AM ASHAMED OF THIS ILLEGAL PRESIDENT.

You bet - I bought TWO since I knew my daughter would filch one anyway. Doesn't matter if your country, rap or classics - Natalie's pipes transcends all that, as do Martie and Emily's back-up vocals and brilliant lyricism. Support those girls, and show those bullying bush creeps that they're fading into irrelevancy.

This is a great CD. The music seems like a mix of country and pop. It is beautiful inspiring music I could listen to over and over, and I like many of the lyrics.

I have never bought a country cd, but I bought the Dixie Chicks new one yesterday!

It was just announced that they are coming to Detroit (Joe Louis Arena) and I will try to get tickets!

Cathy
From the once great State of Michigan where the Repub candidate to unseat Governor Grandholm took jobs to China!

I hate country music being a rock & roll, blues, and world beat musician but I'm buying at least one of these (even if I never listen to it but I probably will). Go girls...

Don't just buy the CD, call your local country radio station and demand they play the "Not Ready to Make Nice" cut from the album.

You get to make a statement and torture right-wingers ears at the same time.

I'm not a country music fan at all, but I'll probably buy it just because.

However I would off the Dixie Chicks the same price of 3-CDs for a foursome with me. I may not like country music, but I ain't dumb!

The following However I would off the Dixie Chicks the same price of 3-CDs for a foursome with me. I may not like country music, but I ain't dumb!

should be:
However I would offer the Dixie Chicks the same price of 3-CDs for a foursome with me. I may not like country music, but I ain't dumb!

I think someone should set the record straight. There really was no need to apologize in the first place. George Bush is NOT from Texas!! He is a blue blood Connecticut yankee born in New Haven, Connecticut. Schooled at Andover, Yale and Harvard - all yankee schools. He is NOT a Texan so no appology was necessary.

None-the-less, it was a courageous move and I solute them.