Busby Loses House Race in California. Get Ready for the Repuglican Spin that the Democrats' Message Has Failed 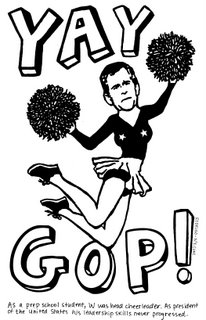 The battle for the House seat vacated by imprisoned former congressman Randall "Duke" Cunningham is now over, and a Republican has retained the seat. Lobbyist and former congressman Brian Bilbray has defeated Democratic challenger Francine Busby in a costly and contentious race in California's 50th district special election. The district has for years been a Republican bastion, although recent polls showed the candidates in a dead heat. But it was a close call. In what is most certainly a blow to the GOP--the race should have been a cakewalk given the Repuglican stronghold on the district--Bilbray won by just about four points. The tightness of this contest could be a foreshadowing of major problems for the Repugs come November, as they desperately strive to retain control of the House.

But just wait. We're sure to be hammered by the Repuglican spin-meisters that the election proves that Democrats are losers with a failed message. You can just hear Rush, Hannity and the chorus of right wing blowhards....

"See? All this talk of Bush's low approval ratings, the war, Katrina, the economy, gas prices.....doesn't mean a thing. Voters simply sent another Republican in to replace the outgoing one. The Democrats had no resonating message in '04, they didn't have one Tuesday, and they won't have one in November."

But the Democrats weren't supposed to win in Cali's 50th district. Busby wasn't supposed to come so close. Nor was she supposed to run neck and neck in the polls leading up to Tuesday's election. The district's been controlled by the GOP for many years, and had voted for Bush in '04 by a solid 10-point margin. That Busby came as close as she did, in such a Republican dominated district, is an undeniable win for the Democrats, and a wake-up call to conservatives that November could be a disaster. Trying to claim bragging rights in this particular victory would be like Larry Brown boasting after the Knicks beat a high school team by 4 points.

Lastly, in the Bilbray-Busby contest, immigration was a key factor. The 50th district borders near Mexico, and Bilbray parlayed this proximity into an aggressive stand against illegal immigration. The reality? Take this issue out of the race, and take this race out of Southern California, and voters would've likely sent the Democrat off to Washington.
Posted by The Ostroy Report at 8:35 AM

The national news last evening said the area was not just red but crimson and any break would be a victory for the Dems.

Until today, I was of the opinion that the republican party did not reflect the values of the rank-and-file republican voter. But Billbray prevailed. Richard Pombo and John Dolittle, both ethcially challenged GOP congressmen, won their respective primary races. Either those who voted for these corrupt bastards are woefully ill-informed or GOP voters just don't care about GOP ethical lapses.

My understanding is, despite Busby's concession, the results of this race are still up in the air given the fact that there are over 65,000 provisional and absentee ballots remaining to be counted. See the link, below, for details.

Also, I heard on Thom Hartmann's radio program today that Busby's campaign strongly encouraged voters to avoid electronic voting, sent paper ballots out in advance and did good job of following up on them.

This election does not bode well for the Dems. Immigration is a national concern and few approve of the way the government proposes to handle it. Not only that, she actually told the illegals to vote because they could get away with it.

Democrats,
celebrate your moral victories, for you are the incredible shrinking party.