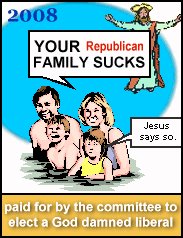 Christian conservatives are hellbent on keeping gays from marrying, saying such same-sex unions are an affront to the great institution of marriage, threatening the very social, emotional and legal fabric which binds a man and woman in holy matrimony. Ironically however, it's these very same bible-thumpers who have the highest divorce rates in the country. The Bible Belt is the breeding ground for broken marriage.

Despite this fact, the right wing evangelical fanatics like to point to states like "liberal" Massachusetts, holding it up as some sort of Sodom and Gomorrah. To the contrary, Massachusetts has the lowest divorce rate in the country at 2.4 per 1,000 population.

According to the U.S. Census Bureau, the states with the highest divorce rates are to be found in the Bible Belt, where they exceed by 50% the national average of 4.2 per thousand people. The 10 Southern states with some of the highest divorce rates were Georgia, Mississippi, Alabama, Arkansas, Oklahoma, North and South Carolina, Florida, Arizona and Texas. By comparison nine states in the Northeast-- where allegedly amoral, faithless, Volvo-driving, Birkenstock-wearing, NY Times-reading lefties are found--were among those with the lowest divorce rates: Connecticut, Massachusetts, Maine, New Hampshire, New York, New Jersey, Pennsylvania, Vermont and Rhode Island.

Perhaps these born-again Christians should actually practice what they preach. Family values? Now that's a joke.
Posted by The Ostroy Report at 7:30 PM

Not only does the Bible Belt have more divorces it probably has more adultery which accounts for many of the divorces; and, "no adultery" is one of the big Ten whereas homosexuality is not mentioned among those commands. But even more puzzling is how a religion supposedly teaching the values of Jesus, who said "Who can throw the first stone?"; "If you do it unto the least of them, you do it unto me." and "Get the mote out of thine own eye", can promote bashing others.

Republican economic policies and government philosophy of laissez faire has destroyed more marriages and poses more of a threat to american lives than any issue that Republicans can trunmp up during an election campaign.

Join the Liberal Democratic Party of the United States of America.

I demand that congress and the president enact universal vote by mail throughout the 50 states of the United States of America with paper ballots easy to fill out and difficult to change or invalidate by partisan officials. This will prevent partisan election officials from vote suppression by skin color and political party which happened electronically and in person in the 2000 and 2004 elections.

I demand that congress and the president enact that civil servants on every state payroll keep track of voter registrations and vote counting of mail in votes in each precinct and not companies connected to a political party.

We need to take the political Parties out of the business of keeping track of voter registration and counting votes.

I demand that congress and the president ban the secretary of state in each of the 50 states from engaging in politics especially acting as a campaign official for a presidential campaign.

Until the congress passes the above demands as a bill and the president signs this into law I will boycott Dell Computers, Wendy's restaurants and Outback Steakhouse 3 well known Republican contributors.