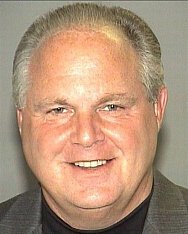 Perhaps he should change his name to Rush Limpaugh. The conservative media blowhard was detained for over three hours Monday at Palm Beach International Airport after Custom officials found Viagra in his bag. Mr. Softee was returning on his private plane from a vacation in the Dominican Republic when his erectile dysfunction medication was confiscated. However, the prescription was in the name of his physician and not under his own name. His lawyer, Roy Black, said the prescription was written in Limpaugh's doctor's name "for privacy purposes." I guess when you blather on every day on the radio as if you have a monstrous 12-inch shmecky it could be a little embarrassing when it appears you're actually hung like an elevator button. And a soft button at that.

Limpaugh, 55, could be in for even more trouble as a result of his little blue pill-poppin'. Investigators will be seeking to determine whether or not old Limpy is in violation of his deal with prosecutors stemming from his 2003 OxyContin prescription fraud case. If so, he could end up in the slammer, where his flaccidity may end up being the least of his sexual problems (ouch).

Limpaugh deserves everything he gets. For years, he's built a reputation as a heartless he-man who relishes emasculating gay men, liberals, drug users and just about anyone who disagrees with his pig-headed, narrow-minded, ignorant opinions. The delicious irony that he can't get it up without Viagra actually makes me wet myself.
Posted by The Ostroy Report at 3:17 PM

The Republican Party's Apologists: No Abortion, But Plenty of Viagra.

Wouldn't be shocked to hear Rush got in on a little bit of man-on-boy action. He's such a hypocrite that the most unbelievable is probably closer to the truth then thinking he just went to get a little action from the middle-aged (25-year-old) girl prostitute.

But its 'news' when a private airplane of a republican working in the private sector is searched by customs and a bottle of Viagra (with no name on the bottle) is found.

If this is news, the whole story should be reported. When the customs agents found the bottle, Rush told them that he received the bottle at the Clinton Presidential Library.

No Larry, it's not. And he was crucified and impeached by the Right for it. Are you for real?

When did clinton (I'm no fan) say it was private ??

And the part about limpbaugh's privates I mean private plane being searched
means what you are saying is if you have your own private plane, you shouldn't be subjected to customs inspections ??

Hey Larry, where were you? I dont remember anything being private about Clintons sexual daliances, in fact I seem to remember being bombarded 24/7 with it.

Who cares about neo-con mouthpiece Rush? He was bought and sold years ago. Though his situation shows how the 4th Amendment is being trampled on at every airline. Not too mention the 4th Amendment violations by NSA wire-taps. Or the 1st Amendment violations by caging protestors or forcing book outlets to stop stocking the book "America Deceived" by E.A. Blayre III. Or the violation of the Constitution by starting illegal wars. Not too mention those.
Support indy media.
Last link (before Google Books falls to the gestapo):
http://www.iuniverse.com/bookstore/book_detail.asp?&isbn=0-595-38523-0

Burn the fat NWO braggard bag of garbage he is!

Ding dong when the wicked witch is gone!!

May he and his New World Order crowd all end up in the bowels of the hell they have given everyone else.

This lying sack of shit must go DOWN!!!!

You what he's doing with that stuff - he's choking his chinken - whacking his wanker - pumping the dragon for a little "handmade" dragon lotion!

Those church ladies that shook Limbo's hands are pissing their pants!

So many questions - so many!

I suppose the pineal cyst (typically found in fat hairy sedentary types) that kept him out of the military keeps him limp.

He wouldn't have needed to haul his stash of little blue pills around if he'd have laid off the oxycoxafloppin.

This was worth waiting for. It's too long between laughs.

Hopefully, Rush Limpballs gets his due, but I seriously doubt he will.

Limpy Limby is the posterboy for the hypocritical rightwing old farts everywhere. I imagine the customs agents knew through the magic of technology that he had previous legal problems with prescription drugs. A bottle with somebody else's name on it is a red flag anywhere in the US. Federal law prohibits the transfer of a prescription drug to someone other than who it is prescribed for. Since his name wasn't on the bottle, he got detained. Are you getting this, Larry?

Limpy Limby likes the limelight. He just continually chooses stupid ways to get it turned on him. He deserves any negative attention he gets. His behavior is all about what NOT to do.

How does Clinton always get thrown in these discussions? Get a new line, Larry, et al. It really weakens your blog cred.

I have to say, it really made us laugh at our house.

Larry, check your facts. The doctor's - possibly two Drs. names where on that not so private bottle.

His attorney said so.

Am I wrong to assume that nobody reading this blog has ever taken a drug illegally?

Anyone ever transport any marijuana across state lines?

If so, would you wish this treatment for yourself? The only reason you even care about this is because he is a republican.

Before anyone tries to attack me, I believe drugs should be decriminalized. If Rush wants to use Viagra, I don't care if he gets a prescription or not. Liberals are very intolerant.

No, dude, you are not wrong. In my youth I've done my share of drugs like everyone else. The diference here is that unlike your big fat sack of shit Limpaugh I don't get on my high horse and publicly bash others while for doing what I'm secretly doing in private. The issue here is not drug use. It's hypocrisy.

Notice how Larry doesn't even bother replying to other comments, and completley changes his rant ??

He must be upset his favorite radio BS'er got caught.

And drviving across state lines ?? What does that have to do with customs ??

He left the --> COUNTRY <--
and came back. He went to a country known for it's sex slave trade with a bottle of viagra.

Rush is not my favorite radio guy. I'm a mark levin fan.

If he broke the law, then he should pay the same penalty that any one of us would have to pay.

I still don't believe this is the biggest news of the day. The Ostroy Report, on the other hand, feels differently.

It's one thing for a idiot like Rush to be caught with pills for which he had no prescription. These thugs, when/if caught always get a slap on the wrist.
If it would happen to a Democrat, he/she would be strung up, tarred, feathered, and run out of town on a rail. The thugs silent motto is 'Don't do as I do,do as I say'.
As a previous poster observed, what's good for the goose IS good for the Limp in this case d**k.
I wish they would put their money where their fat mouths are, and follow their own advice.
I'm sick of all the BS, and the hypocrisy, like this guy in the link below.

Larry said:
"Let me get this straight, its 'private' when a democratic president gets blow jobs while in the Oval Office from...etc., etc., etc."

If Bill Clinton's private life was kept private, how is it you know so much about it?

Clinton's privacy was non-existant then, and still is. Even the shape and size of his tool was reported by salivating Repugs.

Now you're outraged because the news of what James Wolcott referred to as Limbaugh's attempt to "smuggle erections" into the country has been reported?

cranky daze,
I don't believe this was the biggest new item of the day. If he is guilty, put him in jail, like any one of us.

Either way, there are bigger news items of the day that the Ostroy Report could be discussing. Instead, Ostroy chose to ignore real news to bash conservatives most of this week.

What is it about this administraiton and its supporters that they continually break the law and think they can get away with it? But then, I guess that it's because they always DO get away with it.

Larry's obsessed with Clinton and seems to always work it into the conversation. His rants have no real substance to them.

Can you say, "crackpot"?

The repugs break the law because they get away with it.

One example is a repug who is a ranking member of the Defense Appropriations Committee. A lobbyist organization run by his brother and a long time cronie recently got $20 million dollars earmarked for their defense clients. His name is Murtha (R-PA). Did I mention he was part of the Abscam bust. Yeah, he managed to slime out of that one.

Another Repug was recently busted with $90,000 in his freezer. He was actually video taped accepting $100,000 for a bribe. He even laughed on the video because the undercover officers whispering. He said, "What are you whispering for, you think the FBI is listening?". Funny stuff. His name is William Jefferson (R-LA).

Then, a third guy who keeps stretching his face with facelifts was busted by the Federal Election Commission. Apparently, two political action committees linked to Nan Pelosi (R-CA) were caught circumventing the legal limits on campaign giving - same thing as Tom DeLay. Nan's eyes were bugging out of his face when he was caught red handed.

These pugs are bad fella's. Spread the word!!

larry said...
Ostroy chose to ignore real news to bash conservatives most of this week.

Would that be all "the good news from Iraq" that the MSM refuses to report...Wingnut?

That's what I love about you GOP Bootlicks as soon as the news goes south for you and your BS misguided cause you automatically classify it as Fiction or irrelavent.

So why are we in Iraq this week and why aren't you there?

Hopefully, he will be Bubba's bitch for a long time.

Sally, William Jefferson is a Democrat, which the Democrats have repeatedly tried to get him to give up his seat because of his legal troubles.

Back to Lumpy Limpy Limby

Boy, does this guy keep creating some bad Karma.

anony,
But if William Jefferson is a corrupt democrat, don't we want him out of office anyway? Doesn't he set a bad example for us?

Yes, Sally, absolutely. Was just setting the record straight for others since in your previous post you had William Jefferson listed as a Republican.

Jerry sez:
"Either way, there are bigger news items of the day that the Ostroy Report could be discussing."

Yeah, yeah...and ain't it a shame it's Ostroy's blog and he gets to choose the topic?

Supposedly Limpbaugh is now dating the girl who plays Chloe on '24.' But, I wouldn't be surprised if he was looking for a little man on boy action like one of the earlier commenters said.

He, like most on the right, are such hypocrites that it would be par for the course if he condemned others for doing something that he, himself, does. Hmmm...like drugs?

Once you find yourself in the grip of erectile dysfunction, you can opt for the anti-impotency medicine viagra to relieve yourself from the shackles of the disorder. But before getting hold of the medicine and administering it in accordance with the instructions of the doctor, it would be considerably useful to you if you obtain a fair account of Viagra tidbits and for this purpose, you can visit the url http://www.pill-care.com/viagra.html.