The Busheviks and Gay Marriage: The Hypocrisy is Enough to Make You Sick 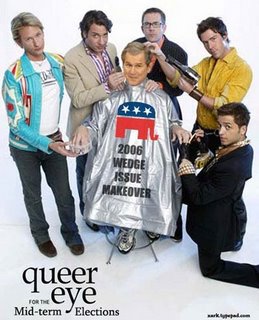 Yesterday I reported on President Bush's White House speech in support of the anti-gay marriage scam called the Marriage Protection Amendment, and how the NY Post said that a Bush pal told Newsweek that the president is using this purely as a political ploy, and couldn't "give a shit" about whether gays marry or not. That Bush is politicizing the issue, or that he's lying about it, is surely enough to anger and frustrate. But after an entire day of hearing about the speech, and seeing Bush repeatedly on network and cable news pandering to the right wing Christian conservative freaks, I'm now seething over this criminal, corrupt and ammoral administration.

The hypocrisy is enough to make you gag. Back in the 90's, well-known Repuglican philanderers like Bob Barr, Bob Livingston, Henry Hyde and Newt Gingrich shoved their mistresses to the side just long enough to impeach Bill Clinton over his marital indescretions. Supposedly closeted gays like Rep. David Dreier (R-CA) and RNC chair Ken Mehlman discriminate against gays at every possible political turn. How about "Randy Randy" Cunningham, the Viagra-poppin' geriatric former congressman who cavorted in DC hotel suites with his Repuglican pals and a bevvy of prostitutes courtesy of GOP sycophant Brent Wilkes? And let's not forget male sex whore Jeff Gannon, who somehow managed to cop himself highly coveted White House press credentials, let alone a likely feel from some high-up Bushevik (or maybe the prez himself??). Or the countless congressmen and senators who are cheating on their wives with lobbyists, staffers and pages. Whatever happened to that wise old adage, "people in glass houses shouldn't throw stones?"

I am disgusted by this hypocrisy, and by what's happening in our country today. By how the Repuglicans have used hatred and prejudice to divide and conquer and turn American against American for political purposes. I am sick and tired of the Bushevik monarchy's lies. The deception. The arrogance. The self-righteousness. The double-standards. Their do-as-I-say, not-as-I-do mantra. This is a gang that would make the Roman Emperor Tiberius proud.

The GOP had the unmitigated gall to send its press secretary, Tony SnowJob, before reporters Monday to arrogantly declare that those seeking to ban gay marriage are fighting for "civil rights." I thought gays fighting for civil rights was a civil rights issue. Pardon my confusion.

It's time we say to the Bush administration and to the Repuglican party, stop insulting us with this gay-marriage non-issue. Enough. We're mad as hell, and we're not gonna take it anymore. And you're gonna see that in the polls come November. Focus your time and energies on fixing what you broke in this country. End the damn war. Shore up homeland security. Bring down the debt. Get gas prices back to reasonable levels. Stop insulting our intelligence with this asinine campaign to distract voters from the real problems in this country. And stop using gays as your political pinatas. They are some of the brightest, most creative, caring and endearing people I've met in my life. You could learn from them. They are not the problem. You are. If you're so worried about the sanctity and preservation of your precious marriages, keep your roving dicks in your pants. This may come as a shock to you, but cheating on your wife will cause a lot more damage to your marriage than two gay dudes tying the knot up in Massachusettes.
Posted by The Ostroy Report at 8:17 AM

I think gays should be allowed to form a union and enjoy the same benefits as married couples. I think America should be secular - and nuture all religions.

But there is an advantage to banning gay marriage and forming a CHristian nation - it will diminh the influence of the Jew, and therefore the influence and hold Zionism has on our treasury, banks and defense.

After we flush those guys out - then we repeal and try again!

Gay marriage is a sideshow and everyone knows it (except that dwindling 28%). The issues in the next election will revovle around starting a War based on Powell's lies, caging protestors, big gov't bullying book outlets to stop the sale of books like "America Deceived" by E.A. Blayre III and NSA wiretapping. Or the lemmings will fall into line and we'll debate tax cuts, gay marriage and immigration.
Last link before Google Books breaks:
http://www.iuniverse.com/bookstore/book_detail.asp?&isbn=0-595-38523-0

Does this mean they'll have to correct the procreation charts and exams so that the old school way of teaching sex and child birth will be "gay" friendly?

"So you see little Suzie and Billy, the penis enters the vaginal canal , uh, I mean rectum, in order to fertilize the ovum, uh, the descending colon after which in nine months, uh, in 9 minutes the fetus, um, feces is born."

We see what it is on the outside, all sweet and caring and happy, but give them the big picture behind the closed doors. I wanna see what it's worth behind the pretty, painted art sale.

Hey you do not have to be for gay marriage in order to be against a Constitutional marriage amendment.

I don't want our Constitution turned into a religious document for several reasons.

First, to single out a particular religious moral "sin" would violate the concept of equal justice under the law & invite tyranny by theocracy that the founding fathers warned against. For example, it's not fair to single out homosexual behavior without outlawing adultery as well which is a greater direct threat to the institution of marriage anyway.

Second, once you start codifying strict religious law into the Constitution people like the "Promise Keepers" might want the Constitution amended for abstinence only or want adultery punished. Then what is to stop fundamentalist from demanding that other strict religious interpretations be codified by Constitutional edict such as the Ten Comandments. Next thing they will want to start stoning people to death. It's too easy to fall into the trap of imperfection afforded by the law alone & forget about the principles in the New Testament that rose above these imperfections. Good principles that guided many of the enlightenment that crafted our Constitution.

Then what happens when the homosexual community starts demanding an adultery amendment in retaliation. What happens when other religions start demanding that their holy book's rules be codified into the Constitution.

Leave the Constitution alone. Our founding fathers got that document right & I don't want to see it trampled upon simply because the republicans need to change the subject from their dismal failures.

How about dealing with Iraq, high gas prices, jobs, crushing debt, rising interest rates & health care. These are family values that everyone can agree on without ramming religion down anyone's throat or singling out a particular group of people.

I'm not against Christianity but I do not support these phony theocracy nuts that are masquerading as Christians. True Christians don't engage in selective morality for show or engage in such massive hypocrisy for cheap political points.

I'm reminded of that old saying "people in glass houses should not throw stones".

Having said that I am equally concerned that the gay community will push for gay marriage too hard & create another election backlash. Can't we all agree to get these republican bums out of power first. That should be isue number one on all of our minds as our very existence as a nation depends on it.