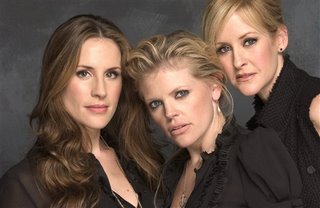 The Dixie Chicks' new album, "Taking the Long Way," opened at #1 on the country albums chart and the Billboard 200 overall chart, sold 525,000 copies in its first week (100,000 more than industry projections) and is one of the most successful openings of the year. Nice revenge for the country group whose lead singer, Natalie Maines, took it on the chin over controversial comments made in 2003 about President Bush on the eve of the Iraq war. But according to Reuters Wednesday, the Chicks have been "Bush-wacked" with "sharply lower sales." The group's 2002 album "Home" sold 780,000 copies in its first week, which is the apparent basis for this supposedly disappointing new opening. Kind of a stretch, don't ya think?

Since '02 we've heard the ubiquitous claims from the right that the Dixie Chicks are done. Finished. That country music fans have soundly rejected them as unpatriotic traitors and will no longer buy their records. To the contrary, first-week sales on "Taking the Long Way" were better than that of two of country's biggest stars, Toby Keith, whose "White Trash With Money" opened with 330,000 units, and Tim McGraw, whose "Greatest Hits Vol. 2: Reflected" opened with 242,000. So much for rejection.

Nice going, girls. Seems like the Chicks have been redeemed after all. Three years ago Maines was vilified for having the prescience to say she "was ashamed" of the president. Americans now seem to agree.
Posted by The Ostroy Report at 8:16 AM

Go Chicks! To their critics "Pluck you!"

I never bought a country album (I play blues and rock), but I'm gonna buy this one. I have a few of my own protest songs, you can download them for free at my web site. www.the-patriot-act.org

Wat to go Tom and thanks forthe blog about the Chicks. Never been a country fan but since The Chick debut album I've become a fan (of theirs at least). Ever wonder about the obvious misogyony of the Chicks 'dismissal'? Kanye west , Bruce Springsteen , Neil Young and others have had albums with blatant presidential diapproval that have done bang-up sales. Wonder why its jus chix that get the shaft...Swim
deepconfusion@blogspot.com