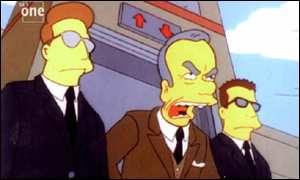 Conservatives love to talk about the so-called "liberal media" and its influence over the news. But just the opposite is true. And they know it. The media is either dominated by full-fledged kool-aid drinkers like Rush Limbaugh, Sean Hannity, Bill O'Reilly and Rupert Murdoch, or sympathizers like Wolf Blitzer, Tim Russert, Chris Matthews and, yes, even the NY Times. It's the Repuglicans whose influence dictates the media's direction, and its coverage of both parties.

In his recent brilliant, and stinging, essay on the different treatment of Democrats and Repuglicans in the press, Jamison Foser exposes the media's true conservative bias. He cites examples of how President Bush, mired in scandal and failure, has basically been given a free ride by the press while Bill Clinton was scrutinized endlessly and mercilessly in the 1990's over Whitewater, FileGate, VinceFosterGate, MonicaGate and more. To prove his point, Foser cites Eric Boehlert, author of the "Lapdogs: How the Press Rolled Over for Bush," who details how ABC's "Nightline" ran 19 programs about Whitewater, "but during the 24 months between Sept. 2003 and Sept. 2005, Nightline set aside just three programs to the unfolding CIA leak investigation, for which Scooter Libby, an assistant to the president, was indicted. On the night of the Libby indictments, Nightline devoted just five percent of its program to that topic." Now which "scandal" do you think merits over six times the coverage of the other, Whitewater or the CIA leak? NIghtline's reporting is hardly the covert work of some vast left-wing media conspiracy.

Foser points to many other double-standards the media has been guilty of involving Bush, Bill and Hillary, and Al Gore. His piece is a scathing indictment of the media's blatant right wing bias. It's a terrific, highly recommended read. Warning: it will make you angry.
Posted by The Ostroy Report at 9:24 PM

I hate to say it, but some days I am so disgusted at the conditions going on in our country and how the MS media fails to report them.

Just yesterday I read on the internet that an officer has refused to go to Iraq. Did anyone hear this on the MS media?

Cathy
Reagan would be proud. It's only taken 25 years to destroy the unions in this once great country.

To DO something about our terrible corporate media, read this (pdf).

It only took 200 years for unions to destroy this once great country.