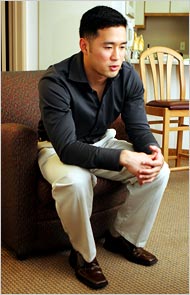 "Simply put, I am wholeheartedly opposed to the continued war in Iraq, the deception used to wage this war, and the lawlessness that has pervaded every aspect of our civilian leadership." These were the impassioned, defiant words of Army First Lt. Ehren K. Watada, 28, in a letter he sent in January "with deep regret" to his brigade commander, Col. Stephen J. Townsend, asking to be allowed to leave the army "with honor and dignity" on Constitutional grounds. The Army's charged him under the Uniform Code of Military Justice with one count of missing movement, for not deploying, two counts of contempt towards officials and three counts of conduct unbecoming an officer. For taking this rare stand, he faces an Article 32 hearing and possible court-martial this Fall. He would be the first Army officer to be court-martialed for refusing to serve in Iraq.

To be sure, Lt. Watada is no coward, and he is fundamentally not opposed to war. To the contrary, after the attacks on 9/11 he enlisted in the Army "out of a desire to protect our country," even paying $800 of his own funds for a medical test to prove he qualified for duty despite having asthma as a child. He served in South Korea, and has been lauded by fellow officers and commanders with praise of his "exemplary" service and "unlimited potential."

So what happened? The young officer, whose military reports cited his "insatiable appetite for knowledge," started reading. He read books by James Bamford ("A Pretext for War"), Seymour M. Hirsch ("Chain of Command") and anything else he could get his hands on about the run-up to war, the abuse of prisoners at Abu Ghraib and Guantanamo, and the Bush administration's campaign of deception. He was particularly outraged by Britain's now-infamous July 2002 Downing Street Memo, which pointed to the Busheviks' early intent to overthrow Saddam by misusing and abusing intelligence to justify the March 2003 invasion.

"When I learned the awful truth that we had been deceived, I was shocked and disgusted," Lt. Watada said. Attempts between the Army and Lt. Watada to resolve the matter failed, with the Army refusing his request to serve in Afghanistan, a justifiable mission he fully supports as being directly connected to the terrorist attacks in New York and Washington, D.C. The Army instead offered him a staff job in Iraq, which he refused. It's the war, not the job, he is opposed to, he said.

Sentiment over the war is at its lowest point in the United States, as civil war rages on in Iraq with 100 Iraqis being killed daily and American soldiers entrenched in a quagmire that's spiraling out of control with no end in sight. Two-thirds of Americans disapprove of the war, of Bush's handling of it, and with a solid majority now believing they were deceived by the administration. Lt. Watada is clearly not alone. And his stand proves that knowledge is power; how outraged people can get when they start learning the truth. For Lt. Watada, it's unfortunate that he's serving in the military, since the military is not very forgiving of those it accuses of desertion. Soldiers have few choices when they oppose the actions of their government, even when that government commits the ultimate act of treason by cherry-picking evidence and manipulating intelligence, and then lying about it, to send its loyal soldiers to die in an unjust, unplanned and ill-fated and utterly avoidable war.

As Michael Moore so eloquently said in the closing minutes of his powerful documentary "Fahrenheit 911,", an indictment of the Bush administration's reckless war policies, "I've always been amazed that the very people forced to live in the worst parts of town, go to the worst schools, and who have it the hardest, are always the first to step up, to defend that very system. They serve so that we don't have to. They offer to give up their lives so that we can be free. It is remarkable, their gift to us. And all they ask for in return, is that we never send them into harm's way unless it's absolutely necessary. Will they ever trust us again?"
Posted by The Ostroy Report at 8:24 PM

He is right and he is a victim, as are we all. He just can't walk away or ignore the problem as so many Americans are doing. If we weren't all so passive there would be more and louder crys of outrage at the deception about this war. I would hope at the least a petition for his freedom without harm would circulate nationally and sent to Washington with thousands of names.

I'm shocked that so few are responding in his defense.

Like Pat Tillman, and other trusting patriotic young Americans, Army First Lt. Ehren K. Latada, had been deaf to the truth about Iraq. The complicit right-wing media saw to it that the lies surrounding the invasion and occupation of Iraq were reverberated in its echo chamber, drowning out the truth. Leading up to the catastrophe of Iraq, the cadre of hateful vicious pundits promoting their evil agenda towards that nation, fueled by countless lies and deceptions, treated more cooler heads with gross derision. Many who spoke up were demonized as being un-American, or worse, unpatriotic. Not surprising then that so many politically unsophisticated types were pulled in by the deception--particularly the young people who were looking to their elders for guidance. I can only wish the Lt. the very best for now taking a stand against what we all see as wrong, un-American, and unpatriotic.

Ehren's name is Watada, not Latada. I can't believe you got his wrong.

Kattysatty, it was a typo in the first part and was correct in the rest of the article. I can't believe you didn't read the entire story.

I can't understand how any one is willing to serve under this idiot in the White House.

More power to him. I resigned in '98 after seven years and a combat tour for similar reasons...the perversion of the military's role to "support and defend the Constitution against all enemies foreign and domestic" into a political and corporate tool. I wish Lt. Watada luck...he has a very steep uphill battle ahead of him. Hopefully when the Schrub is gone all charges will be dropped or he'll be pardoned.

"Law never made men a whit more just; and, by means of their respect for it, even the well-disposed are daily made the agents on injustice. A common and natural result of an undue respect for the law is, that you may see a file of soldiers, colonel, captain, corporal, privates, powder-monkeys, and all, marching in admirable order over hill and dale to the wars, against their wills, ay, against their common sense and consciences, which makes it very steep marching indeed, and produces a palpitation of the heart." H.D. Thoreau

Everyone in the army is a victim. What are we fighting for? Liberty? Freedom? Our freedoms are being flushed down the toilet. The US gov't is violating the Constitution by stealing private lands, caging peaceful protestors, pressuring Amazon to drop the book "America Deceived" by E.A. Blayre III and wire-tapping phones without a warrant. If everyone in the military followed Watada then the Neo-cons would be helpless on their quest for One World Gov't.
Last link (before Google Books caves):
America Deceived - Book

from his writing, ostroy seems against the Iraq war. But he's for th Israel war. Hmmm, that's interesting. He's neither FOR every war or AGAINST every war. I guess that makes him an unbrainwashed, rational independent thinker, unlike the republicans and classic crunchy libs. Too bad more Americans do think this way.
Bob

Cathy
From the once great State of Michigan, where sex with interns is encouraged.

Cathy, Michael Moore is not a disgrace to us Progressive Liberals, he happens to speak the truth and is NOT affraid to.

Don't be sucked into the Fox (GOP) way of thinking that speaking the truth is un-american, Mike's movie 911 did just that and it should be viewed now more than ever.

God bless this young man of citizenship, honesty, integrity and conscience. He is ten times the man the usurper is.

Cathy,
Clean up your act.

I just have question, wasn't Pat Tilman killed in Afghanistan?

Yes, Tilman was killed in Afghanistan. The anonymous poster linking Tilman to Iraq is likely a closet neocon (like Cathy) who is posting false information in an attempt to discredit this website.

Okay, so I’m late in viewing this set of postings. But I just had to leave a comment anyway. All you loony lefties will assure yet another round of Republican victories in the next election cycle. Go ahead - keep up all this weirdo, neo-con, conspiracy-theory idiocy. Whoever the Republican candidate turns out to be, he'll tar Hilary (or whoever is unlucky enough to win the Democratic nomination) with your silliness and you'll all go down in flames (again). Yes, Bush and Iraq are down in the polls, but the majority of the electorate still won't accept the stupidity coming out of you crazies on the extreme left. One more domestic attack and the country will be singing a different tune. You Peace-At-Any-Price types are all foolish tools of our enemies, and you deserve your fate as obscure, laughable outsiders in our political process. Please, please, please keep spouting all this nonsense! Continue trying to hijack the (once great) Democratic Party. Push out moderates like Joe Lieberman (in favor of a neo-socialist). Tear the left wing apart – it will be fun to watch. The Democratic Convention should be a hoot (it’s gonna be 1968 all over again). I will relish listening to all of you whining about a stolen presidential election and threatening to move to France or Canada (again).