25 Things I Will Not Miss About McCain, Palin and the GOP 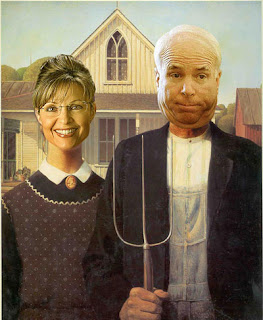 With just two days left until the most historic presidential election in our nation's history, it appears from the major national polls and electoral map that Democratic Sen. Barack Obama and Sen. Joe Biden are racing towards victory, while the GOP's Sen. John McCain and his running mate Gov. Sarah Palin are fast headed back to Arizona and the igloo-with-the-view (of Russia).

To be sure, as the Straight Talk Express heads West Wednesday morning, I will not be mourning the absence of McNasty and the Wacky Wasilla Wonder from the national stage. In fact, there are many things in particular that I most definitely will not miss (in no particular order):

1. I will not miss McCain and Palin's repeated lies about Obama's tax policies

2. I will not miss the phrase "spreading the wealth"

3. I will not miss McCain constantly saying that Obama is "measuring the drapes"

4. I will not miss McCain incessantly reSURGEitating that we're winning the Iraq war

5. I will not miss being told I live in the "unpatriotic" part of the USA

6. I will not miss hearing that trickle down economics is the way to keep America strong despite the fact that it's nearly destroyed us financially during the past eight years

7. I will not miss Cindy McCain standing behind her man at rallies nodding approvingly like a sedated Stepford Wife

8. I will not miss McCain and Palin's brand of McCarthyism, as they relentlessly refer to Obama as a socialist, elitist, terrorist and any other slur that ends in "ist"

9. I will not miss the reprehensible propaganda that Obama's a Muslim

10. I will not miss McCain and Palin twisting Biden's words about Obama being tested

11. I will not miss McCain and Palin's non-stop nastiness, sarcasm and
condescension

13. I will not miss the nonsense about McCain and Palin "cleaning up Washington"

14. I will not miss Sarah Palin. Especially her painfully grating voice

15. I will not miss all the "gosh-darnits" and "you betchyas"

16. I will not miss Palin's views on the role of the vice president

17. I will not miss McCain accusing Obama of being a "celebrity," when his choice of Palin was purely a cheap political stunt designed to turn her into a celebrity

18. I sure as hell won't miss Joe the Plumber...the unlicensed, lien-fighting GOP stooge who just hired a talent manager to extend his annoying 15 minutes of fame despite the fact that we're already sick of him

19. I will not miss the curb-like depths that McPalin's campaign has sunk to and which have empowered miscreants like North Carolina's Sen. Elizabeth Dole to create outrageously offensive "Godless" snear ads directed at her opponent Kay Hagen. That's right Kay, sue the friggin' crap out of her, baby!

21. I will not miss the phrase "country first"

22. I will not miss the blatant hypocrisy and classic Freudian Projection of McPalin

23. I will not miss The View's Elizabeth Hasselbeck's embarrassing attempt to sound like anything but a brainwashed, Kool-Aid-drunken Republican dunce pathetically trying to defend McPalin

24. I will not miss the so-called "undecideds" who, despite having two candidates who are diabolically opposed on every single major issue, are still "torn"

25. I will not miss the undeniable end to the sleezy Rovian era of GOP politics.

I will, however, greatly miss Tina Fey.


On another subject......TICKETS ARE NOW ON SALE for the November 17 Second Annual Adrienne Shelly Foundation Fundraising Gala at New York University's Skirball Center for the Performing Arts. Join us for a terrific evening of music, comedy and film, with scheduled appearances by Paul Rudd, Jeremy Sisto, Cheryl Hines, Mary Louise Parker, Kristen Bell, Lili Taylor, Ally Sheedy, Keri Russell, Gina Gershon and others. To learn more about our mission, to make a tax-deductible donation, and to purchase tickets, please visit our website. Every contribution helps preserve Adrienne's legacy, allows us to help others, and creates something positive out of the tragic loss two years ago of an incredibly loving and talented woman.
Posted by The Ostroy Report at 7:49 AM

I think a better post would have been, what are you going to do when you find the polls have been wrong and McCain / Palin wins? The choices are:

Imagine the horrors that Bush / Cheney can push through in their last three months before the inauguration? Frankly, we've got a lot of time left.

November 5th the campaigning will start up for the 2010 and 2012 elections. It just never stops.

I will not be satisfied that Obama won until all the repub legal challenges are done. If Obama wins, bhey are going to file court challenges.

Everyone vote if you haven't yet. Pay attention. The Repubs have it all in motion to make sure we do not have a clear win. Am I jaded about the election? After 2000, 2004 and what happened in Ohio in 2006, you bet I am jaded!!!!

i guess you wont miss the truth either. enjoy and look back at this as the only warning you got that you were fucking up

I couldn't agree more... Except I think we're going to hear much more of all those 25 things in the coming 4 years once John Satan McCain stole has managed to steal the election (McCain is clearly smarter than Bush - if Bush managed to do it twice, so can McCain).

Let's not rest on the current poll numbers.

Anyone who dislikes McCain, make sure you get out and vote, even if you have some gripes with Obama -- a landslide is much harder to steal than a few-points majority.

I'm not a big fan of Obama myself, but given the other option is 4 more years of Bush, I'll do everything I can to get him elected.

I will not miss Sarah Palin's dumb husband and her stupid kids: Blog, Flap, Bristol-Myers, Dune, Rug, and Blitzen.

Sarah Palin continues to hide her medical records. She has given her GOP rivals a ridiculous amount of ammo to use against her, should she try for 2012.

"who are diabolically opposed on every single major issue".

Heh heh -- was this a Freudian slip when you meant to write "diametrically"?

To answer the question, general nastiness, vulgarity, vile name-calling, racist/sexist/homophobic comments, etc will not be aproved on this site. We aqre now moderating all comments before they are publshed.
Andy

andy, have you forgotten the clinton years?

do you really think the smears end on nov 5?

no sir...the evil wingnuts will work to demonize and discredit the entirety of the obama presidency

we only have one choice

deport the lot of them to alaska...and then nuke the entire state

but leave rove for me...i wanna take care of that closet queen personally

Thanks Andy for going over the comments. I for one had backed away a bit from reading the comments because of the crap these wingnuts keep wasting our time putting in.

I don't want this site to get like watching The View with all the loud mouth comments between Hasselbeck and the rest on the panel.

Tomorrow we'll all be able to sing. Happy days are here again. It's been 8 loooooong years of the rule of the right and it's OVER!!!

you have gone through so much hell these past few years

and while i disagreed with you while you supported clinton, i want to thank you for all of your hard work in the face of such hardships

may you and yours only know joy in the future