Out on the Campaign Trail with The McMuppets 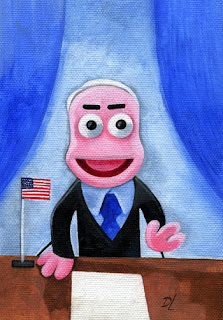 These days, its hard to tell the difference between Sen. John McCain's presidential campaign and Sesame Street. The award winning children's educational television program has a colorful cast of imaginative characters like Big Bird, Bert and Ernie, Oscar the Grouch, Kermit the Frog, Wolfgang the Seal and Nigel the Conductor. But over on Straight Talk Street we have Joe the Plumber, Joe the Chocolate Maker, Cindy the Citizen, Gary the Dentist, Jim the Produce Stand Owner (Mr. Hooper?) and Ramon the Hispanic Chamber of Commerce President to name a few. But the only thing we learn from this twisted show is just how low a candidate is willing to stoop, and how much he is willing to lie and deceive, in order to win.

McCain and his grating-voiced running mate, Alaska Gov. Sarah Palin, are so desperate just eight days away from the election that they continue to ratchet up the inflammatory rhetoric against Sen. Barack Obama and his vice presidential nominee Sen. Joe Biden, resorting to more and more blatant lies and distortions of the truth. And in classic psychological projection that would make Freud proud, they accuse the Democratic ticket of doing and saying everything that in fact they are doing and saying. If it weren't so disturbing it'd be comical.

They're attacking Obama for wanting to "spread the wealth," all because he intends to roll back the massive tax cuts President Bush gave the wealthiest 1% of Americans eight years ago. They say he's a socialist. Well, if it wasn't socialism to give huge tax breaks to the rich, then taking them away certainly isn't either.

Grandpa John and Grandma Sarah are now hammering home the notion that a Democratic triumvirate of Obama, Senate Majority Leader Harry Reid and House Speaker Nancy Pelosi is tantamount to political Armageddon, despite the fact that for virtually all of the last 15 years power has been concentrated in the hands of Republicans, who've been mired in cronyism, scandal and corruption. Perhaps a Democratic hat-trick is just the medicine we need.

McPalin has also resorted to shameful robocalls in which Obama is painted as a terrorist-wannabe. I guess Obama's "radical associations" demonstrates the kind of behavior folks like Gen. Colin Powell condone.

And they accuse Obama of being an elitist (can you be an elitist and a socialist??), while Saucy Sarah spends $150,000 on clothes, hair and make-up in a 45-day period....and her boss owns nine homes and thirteen cars.

This week the new McNasty mantra is that Obama's "measuring the drapes" and "planning his first address to the nation." Where does this nonsense even come from?

I really can't wait for next Tuesday night. Of course, it'll be wonderful and historic to see Obama become our 44th president. But also to finally bid adieu to John the Liar and Sarah the Evangelical Airhead.


On another subject......TICKETS ARE NOW ON SALE for the November 17 Second Annual Adrienne Shelly Foundation Fundraising Gala at New York University's Skirball Center for the Performing Arts. Join us for a terrific evening of music, comedy and film, with scheduled appearances by Paul Rudd, Jeremy Sisto, Karen Black, Ken Burns, Cheryl Hines, Mary Louise Parker, Kristen Bell, Lili Taylor, Ally Sheedy, Marisa Tomei, Keri Russell, Gina Gershon and others. To learn more about our mission, to make a tax-deductible donation, and to purchase tickets, please visit our website. Every contribution helps preserve Adrienne's legacy, allows us to help others, and creates something positive out of the tragic loss two years ago of an incredibly loving and talented woman.
Posted by The Ostroy Report at 7:46 AM

I wish I could fall asleep and just wake up on Nov. 5.....this race is KILLING me, I tell you.

Unfortunately, I very much doubt we've seen the last of the Palin banshee from hell. This above all will be McCain's disgraceful legacy: to have unleashed this Frankenstein monster upon us.

Desperate times require desperate measures, Andy. And who could possibly be more depserate than McCain and his vacuous, opportunistic parasite of a running mate, throwing every charge at Obama and Biden and hoping something sticks. Their truly laughable campaign--more a comedy of errors than anything else--seems to lurch from lie to lie, each more outrageous than the last. I, for one, will also be glad when the campaign is over so I'll never have to listen to McCain's falsehoods ever again!

I was on board a destroyer patrolling the waters off Cuba during the Cuban crisis in October of 1962. Looking back we're all glad JFK was our President at the time. He had a cool head and was willing to work this out rather than pull the trigger. We have found that having a President with a mind like JFK is what we need, not a hot head, shoot from the hip kind of leader.

Great article Andy, but actually Tricky Dick Nixon was inaugurated in 1969 and MLK's and RFK's assassinations were both in 1968----just thought I'd clear that up. Why do you have comment moderation up? I have a funny feeling this wont be posted since I corrected you---but it was meant to help.

Great title to this article.. I was watching Obama last night. At one point he mentioned Harry Potter. Now how long do you suppose it will be before someone accuses him of practicing witchcraft?

I am so sick of the McCain/Palin/Republican Party negativity. They come up with the mose useless crap hoping it will stick. They have nothing to offer so all they do is go negative against Obama/Biden.
I worry though that 1) Republicans will steal the election through voter intimidation and messing with the voting machines 2) Too many white people will not vote for Obama/Biden because Obama is black (half black really) even though it would be best for them and their families.

I am white, but it sickens me to hear white people up front say the will not vote for Obama because of his race. Look at the south. There is no way anyone can convince me that they are not racist with their support of McCain.
Well, if McCain wins, we are doomed.
No hope, no future, no help

Funny you mention Sarah Palin's grating voice. It really hasn't come up as much as you would expect. Instead, we hear more about how great she was at reading off the teleprompter at the GOP Convention. I must have been watching a different convention. All I saw was someone who resembled an unfunny housewife (and I don't mean it in the sexist sense, I mean it in the unfunny housewife sense) doing stand-up comedy for the first time with a bunch of idiots cheering her on. I guess sounding like Frances McDormand in Fargo takes a back seat to her vile views, as it should. But still, shallow as it may sound, having to listen to her for the next four years would be reason enough to move out of the country. GO OBAMA!!