It's Official in NY: Sen. Gillibrand It Is 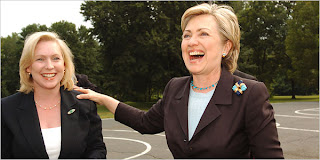 As we predicted here Wednesday, New York's Gov. David Paterson will appoint upstate Congresswoman Kirsten Gillibrand to replace Hillary Clinton in the United States Senate. Paterson will make the announcement at a press conference Friday at noon in Albany.

Gillibrand, 46, represents the state's 20th Congressional District, which serves all or part of Columbia, Dutchess, Delaware, Essex, Greene, Otsego, Rensselaer, Saratoga, Warren, and Washington counties. Much speculation circled around Attorney General Andrew Cuomo, but the Governor went with the relatively unknown Gillibrand, who's proven she can be an aggressive campaigner who can defeat Republicans on their own turf, skills which the Democratic Party will be expecting when she runs for re-election in 2010. It's no small feat that she was the first Democrat in 28 years to be elected in her district. Other candidates included Nassau County Executive Thomas Suozzi, teachers' union president Randi Weingarten and Congressmen Steve Israel.

Gillibrand, who was elected in 2006 in a stunning upset against 4-term incumbent Rep. John E. Sweeney, currently serves on the Armed Services and Agriculture committees. She opposes gun control, social security privatization, the Bush tax cuts for the wealthy, the government's bank bailout (TARP), and a measure that former Gov. Eliot Spitzer introduced to give drivers' licenses to illegal immigrants. She supports extending tax cuts for the middle class, stem cell research, the Children's Health and Medicare Protection Act, and the 2008 Farm Bill.

There's been some chatter about Gillibrand's stand on gay marriage, but Empire State Pride Agenda Executive Director Alan Van Cappelle fully supports her selection as NY's junior Senator: "After talking to Kirsten Gillibrand, I am very happy to say that New York is poised to have its first U.S. Senator who supports marriage equality for same-sex couples."

Gillibrand is a smart, effective and passionate Democrat; a woman who will give honor to and build on the accomplishments and legacy of her successful predecessor.
Posted by The Ostroy Report at 7:44 AM

I'm very glad the new senator is a woman. She replaces a woman and that is the only way to go. Women bring different prospectives that are badly needed.

What a shame. It would have been so wonderful to have Caroline Kennedy in the Senate. But the media made sure that couldn't happen.

An NRA endorsed candidate to replace Senator Clinton? How insulting.

Further, if Gillibrand is such a great conservative democrat, than maybe she should have stayed the incumbent US Congresswoman. If this upstate district often votes Republican, than Patterson may have just given a congressional seat back to the GOP by opening it up.

Let's wait and see what happens.

It's a new day and folks tend to get on the winning side.

The Repubs have no power.