Caroline Kennedy to Withdraw from NY Senate Run. Will Gillibrand Now Get the Nod? 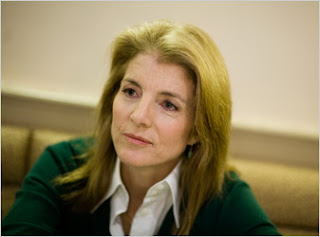 The NY Times reported Wednesday evening that Caroline Kennedy will remove herself from consideration for the New York Senate seat vacated by Hillary Clinton, who is about to be confirmed Secretary of State in the new administration of President Barack Obama. Kennedy is reported to have cited her uncle Ted Kennedy's health problems as her primary reason for exiting the process. Analysts are speculating that Attorney General Andrew Cuomo will soon be named by Gov. David Paterson to replace Clinton.

Cuomo's a likely candidate for sure, but my money's on Kirsten Gillibrand, the 46-year-old two-term representative of the state's 20th Congressional District, which serves all or part of upstate's Columbia, Dutchess, Delaware, Essex, Greene, Otsego, Rensselaer, Saratoga, Warren, and Washington counties. She's a formidable politician and aggressive campaigner. She was the first Democrat in 28 years to beat a Republican in the district. And she's the first woman to win the seat. She's clearly demonstrated an ability to win. Running for re-election in 2010, she'd almost certainly carry the five boroughs, Long Island and her native Upstate. This surely makes her a very attractive candidate for Paterson and the Democratic Party.

And besides, we plugged her and she was a great guest back in 2006 on The Ostroy/DeLaite Show on Manhattan's Time-Warner Cable, so we're pulling for her.

Too bad. We need women in government.

It would be good if the woman got it.