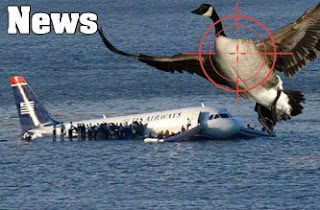 The NY Post on Saturday called for the extermination of New York's geese population as an airline safety precaution in the wake of Thursday's ditched US Airways miracle jet in the Hudson River. In an article with a blaring headline "Hey, Geese, Get the Flock Out," the conservative newspaper blamed the near-tragedy on what it called a "double-goose hit," and irresponsibly challenged officials to "Round them up and get rid of them! Or even kill them if you like....Kill the geese before they down another NY jet."

As expected, New York-area geese expressed outrage, and are calling for the immediate resignation of editor-in-chief Col Allan and Chairman Rupert Murdoch.

"This is a highly offensive overreaction to the extremist behavior of a few radical geese believed to be affiliated with the terrorist organization FPMB (Fowl Play Martyrs Brigade), whose bird-strike suicide missions seek to bring down jets," said Anser Shelduck, spokesman for VAGINYA (Violence Against Geese in New York Area). "The majority of NY's geese are decent, law-abiding fowl. They have a general respect for anything that flies and make a point of staying out of airplane flight paths. Calling for the wholesale extermination of an entire species, as the Post has done, is reprehensible and, well, really sucky."

Negative reaction to the Post's inflammatory piece was loudly heard across America, and has attracted the attention of several celebrity activists.

"I'm not exactly sure why, but I've always loved those birds," said actor Ryan Gosling. "I feel a special kinship with them. Shame on the Post."

"This is horrible," said NBA Hall of Famer Larry Bird.

"I hope the ASPCA's all over this," said former NY Yankees reliever Goose Gossage.

The Post's Allan and Murdoch declined comment.
Posted by The Ostroy Report at 4:04 PM