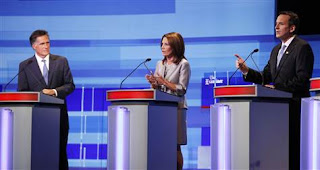 Good news for President Obama. He officially won Thursday night's Republican
debate in Iowa and he didn't even have to show up. Despite all the criticism coming at him from all sides including mine, not one GOP hopeful was able to present him or herself as a viable alternative for 2012.

Mitt Romney, who earlier in the day showed his true elitist colors while defending corporate America as "people too," was as consistently bland, evasive and flip-flopping as ever, while trying to convince voters that having economic expertise means buying up troubled companies and gutting them for maximum profit. If this is what being "front-runner" means, then the party is in very serious trouble.

That other supposed front-runner, Michele Bachmann, came charging out of the gate shouting her talking points and, bragging of her accomplishments, pointed to her "light bulb law." Not one of her finest moments of rhetoric.

Tim Pawlenty, who perhaps had the most to lose, perhaps lost the most. He needed to show voters that he was tough and able to fight. He gave it his best shot. And his best shot was pretty darned weak. Imagine Woody Allen screaming at someone. Not terribly scary.

What was scary though was Newt Gingrich's obnoxious, anger-filled display. He arrogantly criticized everything the moderators asked him as being "gotchya" questions--even those Chris Wallace asked about his record--and he was so full of rage it was embarrassing. This, as his ex-wives will attest, is a man who is clearly used to getting this his way and when he doesn't he gets belligerent and narcissistic.

As for the other hopefuls--Rick Santorum, Ron Paul, Herman Cain and Boy-Not-Wonder John Huntsmann--they were as unimpressive and irrelevant as ever. Yawn....

So that brings us to three Republicans not yet in the race but who very well may dive in shortly: Texas Gov. Rick Perry, Rudy Giuliani, and the Wasilla Wonder, ole Grizzly Mama herself, Sarah Palin.

Let's start with Palin, who in fact will in no way enter the race. She's so ill-equipped to be president that even her empty suit is empty. But she utterly loves all the attention and will milk it till the very last drop.

Rudy Giuliani may be one of the party's best bets, but as soon as Democrats play his infamous "There were no terrorist attacks on Bush's watch" clip he's doomed. Throw in failed marriages, cheating, and a general disdain for the working class and his picture gets even darker.

And that brings us to Perry, who, if he can somehow manage to get beyond his radical "secession" comments, as well his state's dismal record on education, health care and the environment, is most likely to win the nomination. He's an aggressive, articulate, attractive, funny, engaging Texas governor...and we all know how that can end up.
Posted by The Ostroy Report at 8:00 AM

Hillarious How Fox is getting credit for being tough on the GOP while beating up on Gingrich.

Why is Newt on stage with people who have organizations?