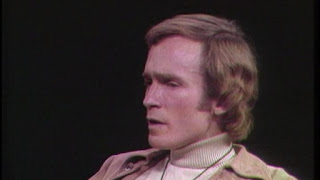 I love Dick Cavett. He's a brilliant, irreverent thinker with a uniquely dry, sardonic, sarcastic wit and deadpan delivery. Qualities that make for a terrific
writer, humorist and interviewer, but unfortunately not a United States
president

Sadly, Barack Obama has become the Dick Cavett President. He's wicked smart, cool and lightening quick with an intellectually biting quip. And while George Bush may have been the guy some wanted to have a beer with, Obama's the guy you'd love to hang with at 2am at a Village jazz club and smoke some weed.

But his brand of nuanced, over-intellectualized witty replies to Republican
street bashing makes him look wimpy, weak and outmatched. While the GOP's Hulk Hogans are verbally beating his ass, he's in full-on Cavette mode. The only thing missing is the mod turtleneck. Guess who's winning the rhetoric war?

Case in point: earlier this week Texas Gov. Rick Perry, the Tea Baggers' Great White Hope since he entered the race a week ago, stooped to a familiar thuggish strategy of attacking Obama's patriotism and calling into question his lack of military service. When asked about this on CNN Obama replied, "I’ll cut him some slack. He’s only been at it for a few days now." WTF?! What kind of lame response was that? That's the best he's got? Asked to comment on the president's quip, Perry deftly attacked with "Actions speak louder than words. My actions as Governor are helping create jobs in this country. The President's actions are killing jobs." Ya see, Dick? That's the way to frame the debate and stay on point, all the while cutting your opponent's legs off.

So what should Obama's reply been? How about:

"Gov. Perry is in this campaign just a week and his #1 campaign strategy for fixing the economy and putting people to work is to attack my patriotism? How offensive to the American people who are seeking help from their elected leaders...not more of the same Republican smear rhetoric and stonewalling." How's that? That would show some fire in the belly. Some much needed balls.

The terrain for Obama could get much shakier if, as reported, New Jersey Gov. Chris Christie decides to enter the race. And why wouldn't he? Obama's struggling on every front, and he's the GOP's wet dream right now. With his big straight-shootin' personality and Boy-Wonder-like deficit-busting reputation and moderate social views, he could, as I've been warning for months, be Obama's worst nightmare. He could be the tough-talking, take-no-prisoners, roll-up-the-sleeves populist firebrand that would appeal to way more independents and moderate Democrats than the administration would like to contemplate.

With the new Gallup poll citing a dismal 26% approval rating on the economy, Professor Obama better immediately rethink his game plan and start fighting fire with fire and show us some guts or he'll soon be back lecturing Constitutional Law in Chicago.

Posted by The Ostroy Report at 5:59 PM