You Know You're a Tea Bagger If... 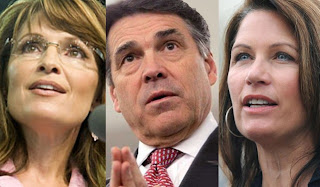 As the 2012 presidential campaign intensifies, there's been much speculation
as to the philosophies, motivations and overall composition of Tea Party constituents.
To help clarify any lingering confusion and to help define these passionate Americans,
I offer the following Litmus Test:

You know you're a Tea Bagger if:

1. You hate science and the corrupt scientists who manufacture data in nefarious schemes

2. You think global warming is a hoax

3. You think there are hundreds of Nobel Peace Prize-winning scientists who believe
in Intelligent Design

4. You think Social Security, Medicare and "big government" are mutually-exclusive

5. You think God is an evangelical Christian conservative

6. You think Elvis was born in August

7. You think the "Soviet Union" remains one of America's biggest threats

8. You can see the "Soviet Union," or Russia, from your backyard

9. You think Paul Revere is famous for warning the British

10. You think the historic "Shot Heard Round the World" took place in New
Hampshire

11. You think John Wayne Gacy was a rugged movie star

12. You think John Wayne was a serial killer

13. You think homosexuals can be "cured" by Marcus Bachmann

15. You think there are "Death Panels" consisting of evil doctors who will kill
old people

16. You think Rush Limbaugh and Sean Hannity tell the truth and that Fox News is
fair and balanced

17. You think governors who advocate their state's secession from the Union
would make great presidents of the United States.

18. You think that African American males like President Obama benefit more by
government assistance than those hard-workin' white folks

19. You think President Obama is an illegal alien

20. You think Michele Bachmann really worked for the IRS just to get inside to
better understand the enemy

22. You love America but scowl when your opponents exercise the very Democratic
principles which make it great, like free speech; separation of church
and state; a free and open press; freedom of religion; checks and balances;
freedom from persecution; and civil rights for all

23. And most of all, unlike your founding Tea Party brethren 238 years ago,
you think "No taxation without representation" really just means "No taxation."

Posted by The Ostroy Report at 8:10 AM

Otherwise, how scary that these folks walk among us.

What about the deluded people who think Obama is still a Democrat?

Please replace every instance of the word "think" with the word "believe". Teabaggers refuse to think. They believe that thinking is wrong.

If you believe that abstinence only education will stop all young people from having sex.

"You think global warming is a hoax"

That means the founder of the weather channel, John Coleman, is tea bagger.

How does Ron Paul fit into any of these categories?