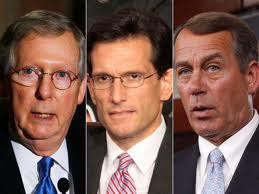 It's time President Obama and Democrats brand Republicans as "Jobs Bill Killers." They need to frame the debate by effectively accusing the GOP as simply refusing to pass any bill, even ones that include tax cuts, that will put struggling Americans back to work. They should repeat the term Jobs Bill Killers like a mantra and utter it in every sentence. Like propaganda. Just like Republicans do. Think "Job killers. Death Panels. Baby killers." It's time Democrats start speaking in soundbites and bumper-stickers. That's what voters understand.

Thursday night Republicans again voted in lockstep to defeat yet another jobs bill put forth by Democrats. In a 50-50 vote, GOP senators defeated a part of Obama's bill that would allocate $35 billion for states and localities to hire additional teachers, police, firefighters and other first responders while protecting existing workers.

"For the second time in two weeks, every single Republican in the United States Senate has chosen to obstruct a bill that would create jobs and get our economy going again," Obama said. "That's unacceptable. We must do what's right for the country and pass the common-sense proposals in the American Jobs Act."

And what got the Republicans' panties in a snit? Funding for the measure would have come from a 0.5% tax increase on people earning more than $1 million a year. That's a half a percentage point on millionaires. You'd think this would be small enough to get Repubs on board, right? As John Belushi would say in his famous Saturday Night Live rants, "But Nooooooooooooo!"

As Senate Minority Leader Mitch McConnell and House Majority Leader Eric Cantor like to say, "Now is not the time to raise taxes on anybody." But I ask, is there ever gonna be a time when Republicans accept a tax increase? The "not now" excuse is just a lame tactic to protect their personal financial interests. It's the same old same old with these guys. Feed the rich, screw the poor and middle class.

The truth is, the Republican Party stands for nothing except low taxes and less regulation. This is the way it's always been and always will be. As evidenced by audience reaction in recent GOP debates, there seems to be zero compassion and empathy for the less fortunate. Republicans in the audiences have cheered and advocated people being left to die without medical coverage. They've cheered executions. They've cheered gays being discriminated against in the military. And they went wild when Herman Cain blamed people for their own state of unemployment. Welcome to compassionate conservatism, 2011 style.
Posted by The Ostroy Report at 8:10 AM

That would be mean and Obama doesn't do mean.

Republians do not want Amercians to go back to work!!!!They just want to stuff their poclets with Taxpayers money.I am not voting for any Republican they are stuck on stupid!!!