Not Everyone in the 1% Deserves 'Occupy's' Scorn 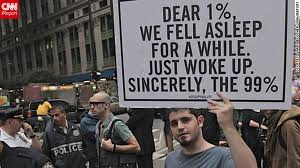 I think its very dangerous, and quite frankly unfair, for the Occupy movement's "99%" to vilify the "1%" as if everyone who falls into that elite income group is (a) corrupt (b) greedy (c) selfish and (d) insensitive and indifferent to the needs and struggles of the poor and middles classes.

Let's get something straight: America is a capitalist nation. Our economic structure is such that there are going to be extremely wealthy people and a helluva lot more who aren't. Those who don't like this system are free to move to another country like North Korea where everyone is piss poor and living under a brutal dictatorship. America's problems aren't about rich vs. poor per se, but about those who care vs those who don't.

The Occupy protesters, in summarily indicting as evil everyone in the 1%, are doing a major disservice to the movement and their long-term cause. At the risk of sounding like a conservative, this broad stroke demonizing of everyone who's rich is class warfare and it needs to stop. There are plenty of kind, decent, generous, very wealthy people who also happen to care about the poor, the sick, the needy, the less fortunate. People who donate millions from their incomes annually to fund all sorts of social, health, education, environmental and child welfare programs, and whose money also goes to political organizations to fight for the little guy. People who've spent a lifetime in public service trying to make things better for those who need help. People who could've financially enriched themselves in the private sector but instead chose meager government salaries. George Soros is in the 1%. The Kennedys are in the 1%. Nancy Pelosi is in the 1% as is Alec Baldwin, Susan Sarandon, Sean Penn, George Clooney and all the notorious "Hollywood liberals" who are as bleeding-heart as you can get. Their wealth has not stopped them from giving a shit. To the contrary, it's provided valuable resources and a greater platform through which to help. These people are among the best friends and benefactors the poor and middle class will ever have. So it's terribly misguided and counter-intuitive to lump them in the same bucket as the self-serving cads who only care about lower taxes, less regulation and protecting corporate largess.

To be sure, there are many gross inequities in America's economic system which have justifiably been the focus of the Occupy protests. The income gap between the rich and poor is the highest in 80 years. The wealthiest 1% have seen their incomes increase 281% since 1979 while the poor and middle class have earned just 16-25% more. The CEO-to-worker pay ratio is around 350-1. Corporate America has been rewarded with astounding tax breaks while shipping millions of jobs overseas. And no one on Wall Street has yet to be penalized for creating the worst financial crisis in 85 years.

But that does not justify an across-the-board vilification of everyone in the 1%. There's nothing inherently wrong with being rich in America. What's wrong is when you use this wealth to disenfranchise and subjugate those who aren't. There are certainly plenty of legitimate gripes the Occupy protesters can and should be angry about. But it would be very wise not to alienate the very rich, connected and influential people who are among its biggest supporters and who it will need in the weeks and months to come.
Posted by The Ostroy Report at 8:19 AM

Not all the 1% are being scorned.

Nobody objects to people who get rich by selling a product or providing a service We The People choose to purchase. Nobody scorned the late Steve Jobs. Nobody scorns movies stars whose movies we love, or musicians whose music we choose to buy.

The scorn is reserved for those Wall Street criminals behind the Mortgage-backed securities fraud, the biggest financial fraud in history, and the US Government that decided it was better to loot the people than to put the crooks in jail.

Our scorn is also for the privately-owned Federal Reserve which by design produces more debt than money with which to pay the debt, a system never intended by this nations; founders and the source of the western world's fiscal problems, and for the Congress and President who sold us back into the very sort of banker slavery we fought the first Revolution to be free of.

There seems to be a new effort (and this article seems to be part of it) to portray the 99% as people who are crying about being poor.
I have no problem with people getting rich in this country, but what's happening here isn't capitalism. It's crime. The 99% aren't socialists, or communists. They're crime victims in a society where all men are supposedly created equal.
Instead of equality under the law, what we have is we have two different justice systems (rich go free, poor go to jail), two different health care systems (which poor people are forced to contribute to financially, but often not allowed to access), and a myriad of other separations that are forming a 'caste' system in what was once the land of opportunity.

Many good points, and nobody faults someone who makes a good product, employs Americans and gets rich doing so. It's when you move piles of money around and a small privileged group takes a cut with every stop, with nothing of value being created, indeed risk and debt being the only thing created, that you get the situation we are in now. What's your vision of capitalism, a system that serves the economy, that respects the owners,labor and customers as equals whose well being is needed to make the system function. Or do you prefer the current system, a brutal dog eat dog competition where capital always floats to the cheapest labor possible, the need of the stockholders is all that matters, wealth is extracted and death,war and privation is what the common man gets in return.

I am a 64 year old entrepreneur. I've owned a small niche retail operation since 1971. I also started a small newspaper in a ski town in 1981 - and sold it 4 years later - it is alive and well even today.

Those are my bonafides -- as they say.

There is something inherently wrong with being super rich in America. Just ask anyone of modest means who has watched the playing field for the last half century.

You do not become super wealthy in this system without insider help and knowledge. The playing field IS and has been rigged all along.

the difference is now people understand the game and won't put up with it any longer.

You say it's not "wise" to alienate the very rich and well connected... har har har.

It's 1789 France son -- and the sans culotte are just waiting for the thumbs up from the 3rd estate .... to begin the carnage.

Armchair revolutionaries like me won't have to dirty our hands. We provide moral authority to those with nothing left to lose.

the middle class tells them ITS OKAY - to begin firebombing mcmansions in Connecticut - to outfit the demon spawn of the rich with necklace bombs.

Hell, a few jumpers on Wall St might dissuade the mobs - but only briefly.

When I saw Corzine's Chapter 11 this morning I wondered who would pick up the tab... probably the taxpayer. Now if he JUMPS??? - that would be a good thing.

Oh, and please report this would be terrorist to the local authorities. I simply cannot wait to describe my utmost fantasies for the carnage to the local goon squads.