The "Occupy" Movement Should Follow the Tea Party Playbook 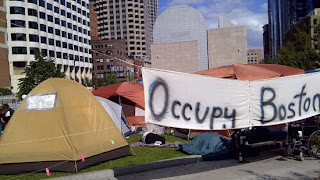 I was in Boston over the weekend and spent some time in "Occupy Boston" on
Rose Kennedy Greenway along Atlantic Avenue. What I saw there left me wondering just where this 'movement' was headed.

Set in Dewey Square in the Financial District near the touristy North End, about 99% of the occupiers are a hodgepodge of newly minted and aging hippies; fringe counter-culturalists advocating everything from class warfare to anarchy and Marxism (several were selling books on the latter two subjects).

There wasn't much protesting taking place either. Just a lot of people sitting around in tents, eating, relaxing and looking more like they were having fun than anything else. The scene looked like Woodstock without the music. You would think on a gorgeous Indian Summer day in a major city that this group would've capitalized on the opportunity to loudly voice its message to the throngs of people walking by. There was no visible anger, no visible frustration. No shouting, chanting or cries of "What do we want/when do we want it?" This was a demonstration in desperate need of populist Viagra.

Most of the signs were posted, not held. Virtually all of them were extremely radical, abstract statements such as:

"The American dream is a pyramid scheme"

That last one seemed to sum up their misplaced anger and confusion: the notion that everyone who goes to Starbucks is in the wealthiest 1%, or that no one who gets a latte before toiling at work all day can possibly be in the 99%. That's a terribly unfair and, quite frankly, disingenuous generalization.

The consensus seems to be that rich is bad, poor and middle class good. The message I heard most was 'We don't like rich people.' And if that becomes their overriding theme, they are doomed as a movement.

Which brings me to the broader protest movement. I haven't been down to Occupy Wall Street but it seems to be attracting supporters across all age, income, vocational, religious and ethnic groups. It appears sufficiently focused on key economic issues rather than waging a counter-culture revolution. I have great respect and admiration for this grassroots group, which is why I have such strong feelings about how they can become an even greater force that can actually achieve change in Washington.

Occupy Wall Street needs to tear a page out of the Tea Party handbook and start letting Washington and the media know exactly what it wants, which as of now is unclear. It should be demanding an immediate jobs bill. A bill to end corporate loopholes. A restructuring of the tax code. No repealing of Dodd-Frank. That is if it actually wants to have an impact on legislation instead of being just an emotional outcry.

The Tea Party message remains crystal clear: low taxes, less regulation and an end to entitlement programs. For the most part, the talking points and demands are consistent from Seattle to Sarasota and everywhere in between. And this is a movement that mobilized quickly, sending 63 Congressmen to Washington to legislate its hardcore agenda. No one needs to ask, "What do they want?" They've successfully transformed how government is working right now and they influence every politician from Eric Cantor to President Obama. Occupy Wall Street's leaders would be wise to follow a similar path to relevancy.

Lastly, a word of advice to OWS supporters: stop telling those who disagree with you, or who question some of the movement's strategies and overall effectiveness, that they "don't get it." It's rude, condescending and utterly obnoxious. You're no smarter or more "in touch" than anyone else. At its core, the movement itself is about the right of dissent and fighting oppression, so this sort of sanctimonious lecturing is rather ironic. Please respect that there are opinions that differ from yours. It doesn't mean that those who have them don't fully support the movement just like you.
Posted by The Ostroy Report at 6:23 AM