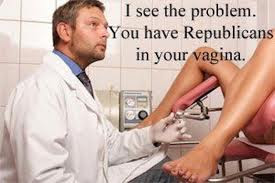 Republican men are obsessed with vaginas. What goes in them, what comes out of them, who can touch them and, of course, those that belong to their mistresses. But to be sure, it's a very unhealthy obsession. For women, for the country and certainly for the Republican Party. This year's presidential election could literally be called "The Rise and Fall of the Vagina Empire."

Vaginas are the Republican volcanoes. They lay dormant for years and then, just when everything seems fine, they suddenly erupt, usually around election time. The nation could be at war, the economy could be in a tailspin, and voters could be more disenchanted than ever. A perfect storm of opportunity for the GOP you say, right? Wrong. With uncanny predictability we see these "severe conservatives" leapfrog over the obvious campaign gifts and crawl right back into the vagina of obscurity and defeat.

Vagina is the Republican crack. They want men to want them, enjoy them and control them. To the Republican male, a vagina is something only they know how to work and protect. To them, the women who own them are simply too dumb, slutty, amoral and lesbian to do what's best with them. So they legislate. They legislate the vagina, or at least try to. Which is why no matter how positive things could look for them in an election cycle, they keep driving off the cliff over abortion, contraception, gay marriage and all sorts of other meaningless social wedge issues designed to rile up their ignorant, backward, hypocritical masses.

But here's the rub. The Republican red meat lies rotting on the floor. The GOP masses aren't buying. That's because they're too busy using birth control, getting abortions and not giving a fuck who marries who anymore. They want jobs. They want financial security. They want better health care and less expensive education for their kids. Ya know, the kind of stuff President Obama constantly talks about and enacts. Which is why he will almost certainly win re-election, maybe even by a landslide, in November.

While Mitt Romney appears to be hanging on to some shred of true front-runner status and just might in fact be the inevitable Republican nominee, his victory won't come because of his wide appeal, his experience or his vision for America. It comes by default. He'll win simply because his opponents' crazy train has derailed and exploded. The campaigns of candidates who've taken extreme conservative social positions have died a horrible, humiliating death. If the GOP and its future candidates were smart, they'd learn from Rick Santorum, Newt Gingrich, Michelle Bachmann, Rick Perry and all the other vagina-obsessed dogmaticos who are setting the party back 300 years and making winning so damn easy for Democrats.
Posted by The Ostroy Report at 8:39 AM

"The Republican Monologues" starring themselves, talking to themselves... is down right masturbatory.

It's dishonest to pose this issue as a Republican issue. They REACTED to Obama's effort to raise social issues to distract people away from the horrible state of the economy that Obama has only made worse.

Obama picked up on the Komen/Planned Parrenthood tumult and simply kept things going.

This sex stuff is all on Obama.