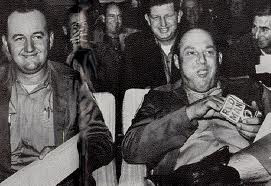 The death of 17-year-old Trayvon Martin one month ago in Sanford, Fl has all the earmarks of the 1964 Mississippi murders of civil rights activists James Chaney, Andrew Goodman and Michael Schwerner... right down to an inept local police department that, while not involved in the actual crime, as County Sheriff and Deputy Sheriff Lawrence Rainey and Cecil Price respectively had been forty-eight years ago, has failed to effectively investigate and arrest the killer. At best, it's an egregious dereliction of duty, and at worst it's a chilling example of the rampant racism that still exists in America today.

In many regions of the country there's been little material change regarding racial intolerance since Chaney, Goodman and Schwerner were beaten and shot to death. In 2012, despite the presence of Lebron James, DisneyWorld and Northeast retirees, Florida is as much the bigoted deep South as 1964 Mississippi. Which is why both the Martin and Mississippi cases required intervention and investigation from the U.S. Department of Justice. So much for progress.

Martin's killer, 28-year-old George Zimmerman, has not been charged or arrested, and remains free in an outrageous, reprehensible travesty of justice. All thanks to Florida's misguided Stand Your Ground Law which states that any person may use deadly force if "he or she reasonably believes that such force is necessary to prevent imminent death or great bodily harm to himself or herself or another."

Zimmerman had been part of an unregistered neighborhood-watch program in his gated community, Retreat at Twin Lakes. Records show he called police at least 46 times in the last eight years to report various suspicious people and acts. According to The Orlando Sentinel and other news organizations, he was twice accused in 2005 of either criminal misconduct or violence. He was licensed to carry a concealed firearm, and had a black Kel-Tec semiautomatic handgun the night he shot Martin. Martin was found with only a can of Arizona Iced Tea and a bag of skittles. Last time I checked, no one's ever been killed by a beverage or a bag of candy.

Florida legislators maintain that Stand Your Ground does not provide a defense for people like Zimmerman who, despite being told by a 911 dispatcher to stop following Martin, pursued and confronted the youth before shooting him to death.

Zimmerman "has no protection under my law," said Florida Senator Durrell Peadon, who sponsored the law. And according to state Representative Dennis Baxley, "There’s nothing in this statute that authorizes you to pursue and confront people.” So how is it that Zimmerman, carrying a semi-automatic weapon, felt his life was in danger by a 17-year-old carrying nothing but candy and a drink?

Wendy Dorival is Sanford's volunteer coordinator for the Police Department. She helped train Zimmerman. She stated that those involved in neighborhood-watch programs are supposed to be "the eyes and ears" for the police, "not a vigilante.” Specifically, she said, members "are not supposed to confront anyone. We get paid to get into harm’s way. You don’t do that. You just call them from the safety of your home or your vehicle." She added that carrying and using a gun on patrol violates protocols.

Furthermore, the National Sheriffs’ Association, which sponsors the neighborhood-watch program nationwide, is 100% clear in its manual on this point as well: "Patrol members do not carry weapons," have no police power, and should “not attempt to apprehend a person committing a crime or to investigate a suspicious activity.” Lastly, not following the guidelines can result in serious consequences: "Each member is liable as an individual for civil and criminal charges should he exceed his authority."

Sanford Police Chief Bill Lee has resigned, but said “While I stand by the Sanford Police Department, its personnel and the investigation that was conducted in regards to the Trayvon Martin case, it is apparent that my involvement in this matter is overshadowing the process."

But that's not enough. What's needed here is justice. Logic and circumstantial evidence suggests that an innocent 17-year-old youth carrying nothing but candy and drink was murdered by an unemployed super-hero wannabe vigilante with a sketchy past and a semi-automatic gun hiding behind some Draconian law after being told by police to go home and let them investigate. It's hard to fathom on any conceivable level how Zimmerman can claim his act was in self-defense, or how and why Lee's police department would let him walk free....automatically presuming his innocence over Martin's. Martin is dead and can't defend himself. Hopefully the rest of America will.
Posted by The Ostroy Report at 7:19 AM

The blood of Yankel Rosenblum remains unredeemed. It happened in the Deep North (New York City), a part of the country that is every bit as racist - albeit in the opposite direction - as the Deep South.

Zimmerman deserves the same treatment that the killers of Rosenblum got - no more, no less.

-Well, I'm here so I might as well comment right? I'll agree this is a tragedy but imo your making judgments based on extremely weak actual evidence. There's far too much race talk all over the place and the odds are that this had nothing to do with a race/hate crime.

-I strive to keep a pragmatic, rational thought process and not jump to any conclusions and believe people (especially politicians & celebrities) are extraordinarily out of line making comments other than something to the effect of "this was a tragedy, my condolences, and I have to reserve judgement till the facts come out.

-You're welcome to look at my take on it here: "Sifting Through the Facts, Furor, and Demagoguery Surrounding the Trayvon Martin Shooting".