Birthers: Why Don't You Just Call Obama a Ni**er? 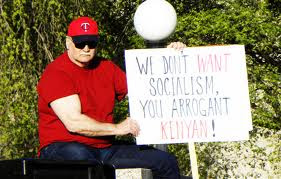 We thought we saw the last of the Birthers when President Obama released his long-form birth certificate a little more than a year ago. Under normal circumstances, even with a "movement" so outrageously offensive as this one, the issue would have been put to bed at that point. But birth certificates don't cure racism. Racists have a way of perpetuating their hate no matter how logical, rational or factual the reasoning against their vile behavior. But why don't these bigots just come out and say what they really want to say: Obama is a ni**er.

Enough with the "Kenyan" code language. These people don't really care if Obama is a socialist, a communist, an elitist, a U.S. citizen or from planet Earth. What does set them into a rage is his skin color. The goal of these racists is to achieve a major breakthrough to other "moderate" racists. The semi-subliminal message they want to convey is, "Don't vote for this ni**er." And, "Do you want a ni**er in the White House again?" Or, "Why vote for a ni**er when you have a white guy like Romney, who's just like us?" That's all this Birther crap is about: ni**er, ni**er, ni**er...

And the same holds true for those who attack the president over his past association with the Rev. Jeremiah Wright, another hot-button issue which appeared dead but simply lay dormant instead, rearing its bigoted head once again now that the election nears. Here a similar ugly message is, "It takes one angry ni**er to know another angry ni**er."

These cowards should just say the word we all know they wish to say but for some convoluted sense of decency they feel they can't. Go ahead, I say to them, use it. It won't make a difference as to how the rest of intelligent society views you. It'll just shine a spotlight on you for exactly who you are.
Posted by The Ostroy Report at 7:15 AM

Because, it's not needed. Everyone knows what they mean.

But, the best thing is every piece of information adds to their beliefs the release of the LFBC made the conspriacy even deeper as Birthers proved it was a fraud immedaitely and thus they had even more evidence!

Where were theyKKK when Bush and the GOP-controled Congress passed Medicare Part D? The most Socialist legislation in a generation" and whenBush Socialized the TSA, AIG, and took effective co trol of the large banks?