A Game-Changing Move That Could Give Romney a Win in November? 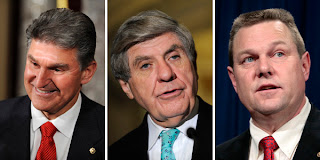 If Mitt Romney wanted to dramatically improve his chances of beating President Obama in the November election he could do one thing: appoint a conservative Democrat as his running mate. Someone like retiring Sen. Ben Nelson (NE), Sen. Jon Tester (MT) or better yet even someone from the South like former West Virginia governor and the state's newly elected Sen. Joe Manchin, for example. The move could be a political coup, and just the sort of game-changer that could propel the presumptive Republican nominee across the finish line.

The political landscape today is more polarized and partisan than ever, and poll after poll indicates that Americans are fed up with the bickering and backstabbing across the aisles. They want candidates who put country first and party second. They want an end to the toxic rhetoric that dominates the debate more than the actual issues that are important to them. They want to know that their elected leaders can work together in true bi-partisan fashion to fix the struggling economy, create jobs, and restore the nation's standing overseas as we fight terrorism and focus on national security.

But the biggest payoff in appointing a Blue Dog Democrat would be how it's perceived among independents, the most critical voter segment of all. The presidential election will be decided by this group, and who they're fired up over is key. Imagine how the unprecedented move of appointing a Democrat to the ticket would appeal to those in the proverbial middle. Imagine the speeches Romney could make:

"It's time to put politics and party aside and put America first! Which is why I'm breaking all the rules and doing what no one else has had the courage to do: I'm putting a Democrat on the ticket with me. Someone who shares many of our ideals and positions and who will help me get Washington working again with true bi-partisanship cooperation. Now this is change you should believe in!"

A risky gamble? Perhaps. But the truth is, both Obama and Romney will have the support of their respective bases. It's the moderates they'll need. And what better way to to appeal to this non-partisan group than with a bold non-partisan move.
Posted by The Ostroy Report at 7:26 AM

I sure hope folks realize what they get with Romney:
End of Social Security
End of Medicare
End of Medicaid (which seniors go on when their funds run out)
End of any chance of a national health care plan
More tax breaks for the rich and oil companies
Less regulations for Wall Street & Banks
Are folks really sure this is what they want?

That would be a smart move, but I might go with someone with a bit more name recognition. I don't know if choosing Nelson - especially because he looks very much like every other dessicated Republican - would get the voters out.

And by the way, I'm guessing Hillary might very well become Obama's Veep.

Andrew, in my humble & pro Romney opinion, this is your best election blog ever and certainly the most logical. You really hit the nail on the head. Now how do we get Mitt to read this & pay attention?

ain't gon happen captain.......he's already made the deal with the devil he would lose 80% of the teabagger vote