My Interview with an Obama Hater 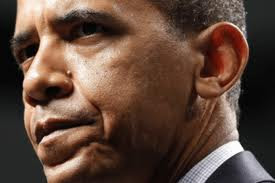 I recently had the opportunity to talk with an elderly blue-collar New Yorker about why he won't be voting for President Obama in November. Dale (not his real name), a self-proclaimed "life-long Democrat" and definitely "not a Republican," is representative of many whites of a certain generation who clearly remain extremely uncomfortable with having a black president but can't openly admit it.

AO: Still a Republican?
Dale: Never was one. I'm not a liberal either.
AO: Not a Republican? So, you'll be voting for Obama?
Dale: No
AO: Why not? Does that mean you're going to vote for Romney?
Dale: Let's just say I ain't voting for Obama.
AO: Can you tell me why?
Dale: I just don't care for him, that's all.
AO: But can you tell me why? Is there a specific policy you don't like?
Dale: It's just the whole thing. Let me ask you something. He was a cut-up in school. Bad marks. Took drugs, cocaine. He was a bad kid. How'd he get into Harvard?
AO: You've been listening to Sean Hannity I see.
Dale: I LOVE Sean Hannity!
AO: I guess that's the non-Republican in you. How about giving me something that relates to his presidency?
Dale: I think he's been a very bad president and all he wants to do is turn America into a dictatorship.
AO: Really? That's a pretty hefty accusation. Can you give me an example of something he's done to warrant that?
Dale: Look, I'm not gonna get into all of this with you.
AO: So you'll drop a bomb like that but not give any substantive explanation for it?
Dale: He's been a disaster for the economy.
AO: Really. And why do you say that?
Dale: You're just trying to goad me into a debate with you and I'm not gonna do that.
AO: No, I'm simply trying to get you to back up your broad stroke accusations with substance, and you don't seem to be able to do that.
Dale: Let's just say you and I disagree and leave it at that.
AO: I have no problem disagreeing with you, or you having different opinions about Obama or anything else. What we're doing here is having a conversation, not a debate, so why can't you simply just explain your positions?
Dale: He's ruing the economy, that's all.
AO: And you're basing this on statistics, leading indicators like GDP?
Dale: No
AO: Job growth? Consumer confidence?
Dale: No
AO: Wall Street gains?
Dale: No
AO: Recoveries in the auto, banking, retail sectors?
Dale: No
AO: So what you're saying then is that actual facts about the economy since Obama took office don't really matter to you. You just make sweeping criticisms but don't care if the facts don't support them. Yeah, I'd say you're voting for Romney.
Dale: Let's just say I'm not voting for Obama.
AO: I know. You've already said that. Why would you vote for someone, for a party, that seeks to take away from you everything you need to survive...Social security, medicare?
Dale: Nobody's gonna take away my Medicare.
AO: Oh really? Have you seen the Ryan budget?
Dale: They won't take away my Medicare.
AO: We need to cut $4-trillion of debt. Where do you think that's going to come from if Republicans take the House, Senate and presidency? You think they won't take it from the poor and middle class? You think they'll choose instead to raise taxes on themselves?
Dale: They won't do it.

Pretty scary stuff. What I saw in Dale was a truly visceral yet inexplicable disdain for Obama which he either couldn't or wouldn't honestly articulate. Unfortunately, people like Dale know absolutely nothing about the issues they discuss. And nothing they say is based on fact. Instead, they regurgitate the "news" and sound bytes they get from Hannity, Rush Limbaugh and other right-wing provocateurs and continue to vote against their own economic self-interests, operating in an absolute knowledge vacuum, to the delight of Republicans who use them and exploit this political ignorance. And what makes 2012 worse than ever in this regard is race. Don't think for even one nanosecond that Obama's skin color isn't what's behind the "I just simply don't like him" sentiments of folks like Dale. But...they'll never admit it.
Posted by The Ostroy Report at 8:51 PM

It has been clear all along that the opposition to Obama has been born from racism. Many are ready to vote against their own interests to get rid of the black man in the white house. That's what they mean when they say they want to take "their" country back.

As much as their racist attitudes disgust me, what's worse is they are going to vote repub. If the repubs win in November, my future (Baby Boomer) is in serious doubt. Many in my age group are going to work until we get kicked off the job and/or we die. Way to go racist angry white men.