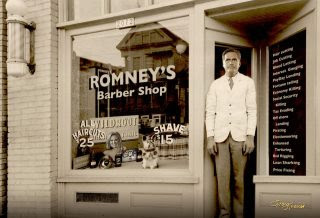 "My God, I have absolutely no recollection of that...but if in fact it's true, I'm horrified and don't care how young I was. Bullying anyone, anywhere, at any age, is 100% wrong and inexcusable and I'm deeply sorry for my behavior."

That is not what Mitt Romney said last week when asked about an incident when he was an 18-year-old student at the prestigious Cranbrook School in Bloomfield, MI. An attack on fellow student John Lauber, believed to have been motivated by his rumored homosexuality and bleach-blond hair that draped over one eye, was the result of Romney's bizarre obsession with the kid's appearance:

"He can't look like that. That's wrong. Just look at him!" an incensed Romney told his pal Matthew Friedemann, according to Friedemann. Led by Romney, Lauber was harrassed, chased, pinned to the ground and then had his hair cut off by the future Massachusetts governor. (pops to comedian Bill Maher, btw, who joked on his HBO program "Real Time" Friday night, "I don't know what it's like at your salons, but isn't the guy usually cutting the hair the gay one?")

Instead of taking responsibility for his reprehensible behavior, the Republican who wants to be president just chuckled and issued a tepid apology akin to 'boys will be boys.'

"Back in high school, I did some dumb things and if anybody was hurt by that or offended by (it) obviously I apologize," Romney said of his "pranks."

As if the chuckle wasn't offensive and dismissive enough, Romney's choice of words with "if someone was hurt by it" shows indifference and a clear lack of empathy. Does he really not know for sure that this vicious attack on a terrified gay kid by a pack of sneering homophobic rich preppies wasn't hurtful?

The real issue here is not solely what Romney did as kid, but more so how he's handled questions about it as an adult; as someone who's running for the most important job in the world. It speaks to Romney's character. Maybe his former opponent Rick Santorum is right: the man has no core.
Posted by The Ostroy Report at 8:56 PM