A Conversation with Ted Cruz 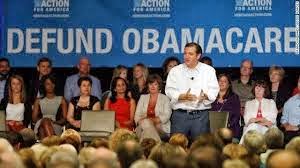 To Democrats and moderate Republicans, Ted Cruz is akin to the Antichrist...a demonic, destructive, self-aggrandizing maniac who just might destroy the global economy and the GOP in one fell Obamacare-hating swoop. But to right-wing extremists and Tea Party loyalists, he's a modern day Samuel Adams; a true American patriot and hero whose I-don't-give-a-fuck attitude makes them swoon more than Sarah Palin.

But there's something on which both sides can agree: Cruz is an enigma.  How is that this first-year Senator from Texas with the puppy-dog eyes and cartoon voice, who catapulted to overnight international infamy, has become the most feared man in Washington on both sides of the aisle?

And so I've imagined the following chat with the man so many people love to hate:

Ostroy: Sen. Cruz, Might I congratulate you on being the first Senator to be hated by both Democrats and most Republicans.

Cruz: Why thank you! I've been working very hard to achieve that unique distinction.

Ostroy: Most people attribute the government shutdown and the looming debt-ceiling crisis almost exclusively to you. How and why have you gotten yourself into what Jon Stewart refers to as this colossal "Shutstorm?"

Cruz: It's all because of Obamacare. I've been one of the very few to aggressively oppose this welfare-state program which is destroying America.

Ostroy: "Destroying America?" Senator, that's a pretty dire, hyperbolic accusation. Can you please tell us exactly how Obamacare is destroying the country?

Ostroy: What do you mean? You just made a broad-stroke attack on President Obama's signature health care reform. Was that just calculated fiery rhetoric?

Cruz: Yes, that's exactly what it is. You got me! Sounds good though, huh?!

Ostroy: You've said Obamacare is a disaster, and pointed to the recent problems--computer glitches and such--since its October 1st launch as proof that it's a failure.

Cruz: That's correct. There are millions and millions of people who've flocked to that website only to find that they couldn't access it. Couldn't even get online to get info or to register. So yes, it's an unmitigated disaster.

Ostroy: You're summarily dismissing the program's long-term merits and value because of near-term, temporary computer glitches? That seems terribly myopic. If "failure" is defined as initial website problems, will you then concede it's a success if, say, a month from now the site's easily accessible and millions of uninsured Americans have signed up?

Cruz: Er....um....hey, how about those Cowboys!  But seriously, listen to the American people. They're telling you they don't like or want Obamacare.

Ostroy: But what about those "millions and millions" you say who've been "flocking" to the site? As Stephen Colbert joked, "Too many people signing up is always the surest sign that nobody wants it." You realize your contention about what Americans want makes no sense, right?

Ostroy: And speaking of not making any sense, you're now calling for Obamacare's individual mandate to be voluntary. Voluntary mandate. Senator, you're starting to sound like Palin now. Do you realize how oxymoronic that is?

Cruz: Are you calling me a moron? The American people don't like that.

Ostroy: Let's talk about your visit this past weekend to the World War II Memorial in DC. You were protesting the site's shutdown, blaming it on Democrats who you, Palin and others accuse of causing the government shutdown. Isn't that a bit disingenuous Senator?

Ostroy: Isn't that a patently false accusation in fact?

Cruz: You betchya! Oh, sorry. You hang around with that ditzy broad long enough you begin to sound like her!

Ostroy: You do acknowledge the fact that it is Tea Party Republicans in the House, led by your troop-rallying and sabre-rattling, that's responsible for it all, don't you?

Cruz: Hell yeah! Why do you think I'm smiling all the time? I've been smiling more than Eric Cantor through this whole game!

Ostroy: But that's just it, Sen. Cruz. It's not a game. 800,000 people have lost their jobs. Military families have lost benefits. Sick children can't get medical treatment. Our fragile economic recovery risks being hurled back into recession. The global financial markets could face catastrophic consequences.

Ostroy: America's standing in the world is being tarnished. We're an embarrassment overseas. The full faith and credit of the United States is being pathetically played by you and your henchmen like a bad poker hand. Do you have any idea what you're....

Ostroy: ...doing to America? You're pissing on the Constitution, on the presidency, on Democracy...

Cruz: You're right. Jeez, you're so right. Excuse me for a moment. Betty...get me Speaker Boehner on the phone right away....!

Posted by The Ostroy Report at 8:08 AM