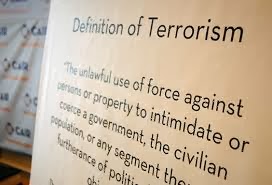 Consider this: a radical, militant organization commits threatening acts which place the United States on security lock-down. Or perhaps they hack into Wall Street's vast, intricate computer network, sending the stock markets and banking system into chaotic panic. Or they make hostile demands which, if not met, could bring down our financial system and the global economy.  We'd unequivocally label these acts terrorism. So why shouldn't we  consider the Republican Party's similar acts of extortion of the past week terrorism?

The GOP, and in particular its radical Tea Party faction led by "House Speaker" Sen. Ted Cruz and his second-banana Rep. John Boehner, has stopped the wheels of Democracy from turning by taking the government hostage over its obsessive, all-consuming hatred of President Obama and his signature health care reform, the Affordable Care Act (ACA), which they've derisively named Obamacare. Never mind that ACA is standing law which passed both houses of Congress, has been signed by the president, challenged and upheld in the Supreme Court and reaffirmed in 2012 by voters who re-elected the man responsible for it while summarily rejecting his challenger who opposed it.

Make no mistake: holding a gun to Obama's head while shutting the government unless he caves in to their demand of de-funding or delaying ACA is not just "treasonous," as former Labor Secretary Robert Reich called it, but a despicable act of terrorism. The GOP is holding the American government, economy, people and political process hostage and, with the October 17th debt-ceiling deadline rapidly approaching, the threat of default has put the full faith and credit of the U.S. at grave risk. That this terrorism is domestic, and comes from within the Beltway, doesn't make it any less terrorism. It just makes it more shameful and unconscionable.

Republicans have irresponsibly and reprehensibly put party before country, using and abusing the levers of government in an ideological feeding-frenzy after forty-three failed attempts at killing ACA. And now with the government shut and ten days away from defaulting on its financial obligations, the economic impact could be "catastrophic," according to Treasury Secretary Jack Lew.

"I'm telling you that on the 17th, we run out of our ability to borrow, and Congress is playing with fire," Lew warned.

The House's suit-clad terrorists could end this unprecedented, apocalyptic standoff by voting on a clean continuing resolution which would immediately re-open the government and serve as the framework for reaching a debt-ceiling deal. Obama and Congressional leaders claim the CR would pass with bi-partisan support. But Boehner refuses to allow the measure to reach the floor.

"The votes are not in the House to pass a clean debt limit," the neutered Speaker said.

Boehner won't allow a vote because he knows it'll pass. Though he more than likely would like to call a vote. But unfortunately these traitorous rebels are holding Boehner hostage as well. They've strapped him behind the wheel of the GOP crazy-bus, on Cruz Control, and sent him driving the party off a cliff.
Posted by The Ostroy Report at 11:20 PM

Who will stop the madness? Any sane repub leaders that might be left and rich repubs (not Koch brothers). Short of that, what can be done?

It's sad but the only way to defang these Tea Party crazies may be to default so their financiers and supporters can see how they deoend on the government. Stop the Social Security checks and tell them they have to prepay for all medical treatment (you know how much the GOP hates negotiating drug and medical care prices)

Worse yet, he arguably unconstitutional actions by the House Republicans are actually threatening the health and well being of millions of Americans for political reasons.

That means their terrorist actions can also be classified as Domestic Terrorism.

It's hard to ignore the fact that the GOP and particularly the Tea Party have done more damage to the country than terrorism ever has.

Worse than Al Qaeda and causing more damage to the Nation.