The Republican version of Suicide Bombing

A person walks into a foreign 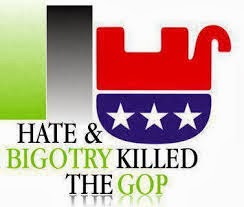 cafe, a disco or a bus with explosives strapped to his or her body. In a flash there's horrific carnage and, soon after, a proud claim of responsibility by a fanatical group...all in the name of a heated cause which the violence is designed to further. But in the end this irrational, delusional, self-destructive act typically leaves a dead suicide bomber, innocent people killed and wounded, and a worsening, not a fix, of the root problem. That's what House Republicans, in particular the radical Tea Party faction, have done by shutting down the United States government. It's political terrorism at its worst.

All because they hate Obamacare, officially known as the Affordable Care Act (ACA), more than they hate the president himself. And they hate their view of the 'welfare state,' a stomach-turning landscape where their hard-earned money is being used, or more so abused, to subsidize the needs of a lazy, shiftless mostly minority poor and middle class. So they refuse to pass an appropriations bill, threaten not to raise the debt-ceiling by the October 17th deadline, and in effect close the country. The collateral damage from this unconscionable behavior is being felt by everyone from the 800,000 furloughed government workers, to the National Guard and Reserves, and to the children who cannot get cancer treatment at the National Institute of Health.

Additionally, many intelligence and counter-terrorism experts, including Rep. Peter King (R-NY), former chairman and current member of the Homeland Security Committee, and James Clapper, Director of National Intelligence, said the shutdown has threatened America's security. A risk, Clapper said, which "will accumulate over time."

These "wacko birds," as Sen. John McCain (R-AZ) has called grandstanding Tea Party poster-boy Sen. Ted Cruz (R-TX), apparently do not believe in Democracy and think they have a right to hold America's economy hostage--putting a gun to President Obama's head--by demanding the repeal or delay of his signature health care reform which has been passed by Congress, upheld by the Supreme Court, and re-affirmed in the last election by voters...who chose Obama over his repeal-obsessed rival Mitt Romney (whose health care reform in Massachusetts while he was governor, by the way, was the Heritage Foundation-created model ultimately used as a basis for Obamacare).

"They won't even negotiate," charges House Speaker John Boehner and other conservative leaders. But that accusation is patently untrue. Obama and Democrats have conceded on single-payer, the public option, a one-year delay in the business requirement of ACA, and an agreement to adopt 100% of the cuts and spending in the $988-billion budget Republicans have sought (essentially, the Paul Ryan budget). As Senate Majority Leader Harry Reid and others have said, the GOP's too stupid to accept 'yes.' Nothing can or will satisfy these right-wing loons, as the current fight is not over spending and cuts, but of their intense loathing of Obamacare and their unrelenting obsession with destroying it.

"We've got divided government," Boehner said Wednesday following a nearly 90-minute meeting with Obama and Democratic leaders. No, Mr. Speaker, what we have is a divided GOP. Can't we bring back the good old days when Republicans were just a bunch of angry, rich, white elitist obstructionists instead of the certifiablyinsane, angry rich, white elitist obstructionists who rule your House today? Boehner lamented that what's happening in Washington right now, the seemingly impenetrable gridlock, is not the governance America's Forefathers intended. To be sure, our Forefathers did not envision a government in which one disgruntled party, obsessed over the majority's signature legislation which they've failed to repeal forty-three times, brings our nation and the global economy to the brink of financial disaster.

Republicans have pointed to Tuesday's computer glitches, caused by an onslaught of exchange website visits once ACA went into effect, is proof positive that the program's a disaster. And they're maintaining their claim that their fight is on behalf of the American people. That they're "listening" to the "overwhelming majority" who dislike Obamacare and want it defunded.  Right. As Stephen Colbert noted, “Too many people signing up is always the surest sign that nobody wants it.”
Posted by The Ostroy Report at 8:01 AM