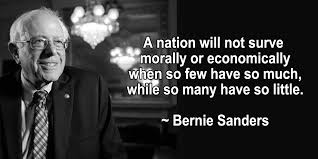 Bernie Sanders has run one of the most successful "outsider" campaigns in the history of American politics. The self-proclaimed socialist has done so largely as a crusader against income inequality.

Yet in 2014 Bernie and his wife Jane earned $206,000 according to their federal tax return, placing them in the top 6%. Even if you use just the Vermont Senator's $174,000 salary, he's still an 8%'er. And then there's the $200,000 golden parachute his wife Jane took upon her departure as president in 2011 from Burlington College after nearly bankrupting it over a bad real estate deal. The poor and middle classes are lucky to get two weeks' notice when they get fired.  Talk about inequality. Excuse me if I see a bit of hypocrisy in the Bank of Sanders.

Bernie's supporters argue that his high salary is what the U.S. government pays him, as if that's some sort of justifiable excuse; an excuse they surely don't accept from Hillary Clinton when defending her $200K Goldman Sachs speaking fee with, "that's what they paid me!"

As the man or woman on the street would tell ya, $174,000 is a lot of dough. More than what 92% of Americans earn. Jane's $200,000 exit payoff is nearly four times the average U.S. annual household income. How come Bernie doesn't take a big chunk of his taxpayer-paid salary, $75,000-$100,000 for example, and donate it to NARAL Pro-Choice America, Black Lives Matter or any one of the numerous charities that help single mothers and people living in poverty, such as A Safe Haven?  Wouldn't that make his Robin Hood campaign that much more credible?

How does Jane's golden parachute--a financial practice typically reserved for corporate bigwigs, the very people her socialist husband relentlessly and mercilessly rails against--square with Bernie's income inequality crusade? Could she have taken this obscene sum and donated it as well?

The Sanders' 6%'er household income and Jane's parachute is like a movie being played out with two vastly different narratives. The first act tells the story of a relatively unknown righteous underdog of virtue who fights tirelessly to level the economic playing field in what former North Carolina Senator and presidential candidate John Edwards referred to as "the two Americas."

In the second act we struggle with the inherent hypocrisy of the man's own elite financial standing and Goldman-esq payment to his wife. The audience squirms and asks, how is this possible? Why take Bernie seriously while, when it comes to his pocketbook to support his own standard of living, he seems all too comfortable cashing checks that make him wealthier than 94% of the population? A man who has no problem with his wife accepting a $200,000 Wall Street-ish golden parachute as he demonizes the very same industry for engaging in the very same practices that serve to create the very same income and wealth inequality he's made the cornerstone of his revolution? The goose and the gander come to mind here.

So the big question is, what does the third act have in store? There's no indication that Sanders will alter his personal financial landscape to match his fiery anti-corporate/wealthy rhetoric. So is Bernie a "Democratic socialist" because this contradictory label allows him to say one thing and do another? To tell the rest of us how unfair our economic system is while he nestles comfortably in its bosom?

Perhaps this is how the film will end: that after 45 years in public life as a relatively obscure progressive outsider from Vermont, Sanders simply took to his newfound celebrity and rock-star status (who wouldn't love thousands of young women chanting his name at packed arenas?) like a junkie on a crack pipe. That he's now had a taste of this unprecedented fame and political fortune he simply cannot let go of it. For his legacy's sake, hopefully he won't turn the Democratic nomination process into a chaotic mess, helping Donald Trump ultimately win the presidency, and end up a mocked and scorned footnote in history like Ralph Nader.

To be sure, it doesn't appear that, despite having no rational, mathematical path to the Democratic nomination, this 74-year-old white-haired Thomas Paine is throwing in the towel anytime soon. Instead, he's disingenuously filling his supporters' heads with more inflammatory red meat about a "rigged system," rather than a lack of votes and delegates, that's denying him his inevitable seat in the Oval Office.

So despite the enviable veneer of altruism and selflessness, is Bernie Sanders just a typical politician who lies to his constituents, feeds them empty promises, all the while living the life of the kind of wealthy, privileged American he attempts to shame at every turn? Only time will tell.
Posted by The Ostroy Report at 2:13 PM

Wow you've gone waaaay off the deep end Andy. Have you met him? I make north of the "median income" and work in an office, yet I have holes in some of my clothes.
I don't go out of my way to donate to charities either, although I do shop at thrift stores for clothes so much I have a VIP card from a Vegas one. Especially political "charities". But I digress.
You know how hilarious it is to see someone calling a "top 9%er" hypocritical for making 3x what I do when Shillary gets 8000x what I do for orally pleasuring Wall Street?

Nominating Bernie would be nice, but failing that, the final end of the Clinton-Bush era MUST be a goal for moving forward for the good of the next generation. The Republicans did their part by keeping Jeb! At 1%.

Now it's our turn by throwing the shill under the bus.

It's sad. I keep hearing members and fans of Team Hillary complaining that Bernie is willing to throw Hillary under the bus to help his own cause, but they're all too willing to pen fundamentally dishonest attacks like this one.

I'm finished with the Democratic Party. Fortunately I live in Virginia, where there are no "registered" Democrats or Republicans or any party, so I don't have to change my registration; but I can no longer in good conscience consider myself a Democrat. Party over country used to be a Republican thing, or so I convinced myself over the years. I see that if that was ever true, it is no longer. I'm done with it.