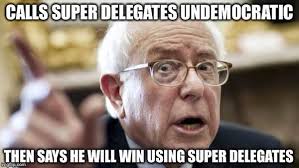 Math. Path. Wrath. This has been the process through which Bernie Sanders' supporters travel. They don't get the math, so they continue to see his path, and if you disagree and speak to the realities of the campaign, you'll reap their wrath. And what's their main fuel? The super delegates. Hillary Clinton has about 500 more of them than Sanders. But according to Sanders' ferociously loyal legion of millennials, Bernie can still win the nomination because the super delegates could dump Hillary for him at the convention. And herein lies the massive delusion.

To be sure, Sanders' supporters hate the concept of super delegates, and are in denial over their allegiance to Hillary. "They don't count" is the common refrain. But all this bluster only serves to demonstrate a lack of understanding of who the super delegates are and why the chance of them switching from Clinton to Sanders is less likely than Knicks president Phil Jackson abandoning the triangle offense.

So let's analyze for a moment just who these mysterious folks are. Super delegates consist of members of the Democratic National Committee, party leaders, Senators, Congressmen/women and state Governors. Stalwarts of the Democratic establishment. Prominent people such as Andrew Cuomo, Cory Booker, Sherrod Brown, Jim Clyburn, Joaquin Castro,  Dick Durbin, Kirsten Gillibrand, Terry McAuliffe, Claire McCaskill, Nancy Pelosi, Maxine Waters and Charlie Rangel. At best it's misleading for Sanders and his surrogates to repeatedly drum into supporters' heads that these super delegates can be co-opted. They can't. And won't.

One needs to understand why the super delegate process was created in the first place. It was part of a set of rules created by the Party following the 1968 nomination of Hubert Humphrey, who hadn't run in a single primary and who eventually lost in a landslide to Richard M. Nixon. It was a failsafe strategy designed to ensure the nomination of electable candidates; to prevent a candidate precisely like like Bernie Sanders--an independent, socialist outsider who's not part of the Democratic machine--from winning the nomination.  So to understand this super delegate system is to understand why there's no chance these Washington "insiders," the establishment, would not only not abandon the candidate who currently has the most votes and pledged delegates but, more so, would suddenly throw their support to someone who is not one of them.

The real rub here is that Sanders himself knows all this. Yet he continues to fan the flames of anger and resentment, amping up his rhetoric of a "rigged system" where super delegates either don't count and/or will magically propel him into the Oval Office despite there being absolutely no logical or historic basis for them to switch allegiance. It's time that he share this reality with his supporters.
Posted by The Ostroy Report at 7:49 AM

Once again Andy I must agree with you. When Bernie started his quest it was refreshing to hear his ideas. The more he talked he only had his same stump speech to go back on, never any new ideas. He made sure, even as of last weekend, to be on any talk show that would listen to him. The problem is he only keeps pointing his finger, yelling to his sheep that it is he, and only he that has all of the solutions. The same old go around about wall street, big banks, the system is rigged and yada, yada. He is terrible at math and it proves so by him still saying, keep giving me money and we can still win this over Hillary. His math on paying for all his FREE stuff comes from the same book of his.

In the beginning I thought well maybe he might be okay, but it didn’t take long to get turned off by his manors. He has turned into a grumpy old man, who’s tasted the cheering crowds and it has gone to his head. He just doesn’t know how to pack it in and show everyone his good side, if he really does have one.

I feel for Hillary, she is the most qualified person we’ve had in decades and she has to contend with a grumpy old man and a crazy old orange man.

Thanks Andy for your great writings I look forward to everyone you write.