A Conversation Between Donald and Melania Trump? 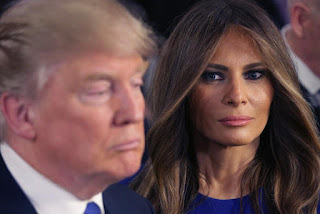 Donald: What the hell do I do now, Melania? I'm the frickin' Republican nominee! That wasn't supposed to happen! This was supposed to be fun for a few months. I'd get to feed my ego and pretend that I actually have a shot at being president. Tons of free advertising. Would be great for business. The brand. Bring more viewers to The Apprentice. More people to my hotels. Instead, I'm the one who got fired on Apprentice, and bookings at the hotels are way down. This is a nightmare!

Melania: But Donald, wouldn't it be fun to be president?

Donald: Fun? I don't want to be president, Melania! Don't you understand? That's a horrible job. We'd have to move to Washington DC and live in that little house. And instead of having everyone kiss my ass all the time I'd have to kiss everyone else's ass...Congressmen, Senators, world leaders, the press. And they hate me there. Here I'm The Donald. The boss. When I say 'jump' they say 'how high?' In DC no one would listen to me.

Melania: But Donny, you always say 'When Trump calls and asks people to do things, they do it!'

Donald:, Melania, my saucy Slovenian sex goddess, are you dumb!? That's all just BS I say on the campaign trail. Life doesn't work that way. In NY if people don't listen to me I fire them. I can't fire anyone if I'm president. They don't have to listen to me.

Melania: So then how do you get out of this mess, my sweet sexy orange manchild?

Donald: I don't know. I've tried everything. I've called Mexicans rapists. I rant about building a stupid wall. I say I'll ban Muslims. I call women bimbos and fat ugly pigs...and say they're not "10's" like you, my hot little immigrant baby mama. I've mocked the crippled. Bashed war heroes. Cozied up to David Duke and the KKK. I've even taken on the freakin' Pope, for God's sake. I've bragged about my shlong size! And they still love me! There's nothing I can do to turn them off. They're really stupid, these people. They think I actually give a shit about them. Too dumb to even see how I've used them. I live in a gold-filled mansion in the sky, travel on private jets and helicopters, ride in limousines...yet somehow I've convinced these bozos that I'm one of them. What's wrong with these people?

Melania: What else can you do, Donny?

Melania: But you know I don't like it when my Donny is so mean!

Donald: Maybe I'll shoot someone! Like Cheney did! I'll take Lewandowski hunting with Eric and Don Jr. We'll make it look like an accident. They'll say I'm too dangerous to be president!

Melania: Ok, Donald, that sounds like a great plan!

Donald: No it doesn't! You really don't understand the problem, do you!? I could actually kill someone and my crazy fans will make excuses for it. They'll say the person deserved it.

Melania: So what are you going to do, my big strong spray-tanned love savage?

Donald: I don't know. Maybe I'll name Bernie Sanders as my running mate. But ya know what? His fans are just as crazy as mine. That might just clinch the whole thing for me. What do 'The Jews' say, Oy Vey?

Posted by The Ostroy Report at 7:45 AM

Andy, this was my thought many, many months ago. Trump started this all as a whim, to have some fun and just play with the press and the American people. This is so Trump, just brag and BS your way and watch the sheep fall for it hook, line and sinker. This is his M.O. and we all know it. Look at all of the crap he’s come up with over the years. His steaks, wines, resorts, golf courses, hotels and casinos and now the best of all his Trump University scam. He lies constantly and still his sheep don’t care. He insults everyone, and I mean everyone and still that’s okay with his flock.

Now he is the nominee and he is in a hell of a pickle. If he is elected (God help us all) ALL of his taxes will need to come out and then his idiot followers will find out what the real Donny is worth, and how little he’s paid in taxes. He will have some real problems to answer to and that will be impossible for him to actually talk in complete sentences to faintly seem like a President.

I predict he will somehow figure out a way to turn down the nomination at the convention and turn this entire election year upside down. Never underestimate Trump when it comes to doing the outlandish.