An Open Letter to Donald Trump: WTF Happened to the Liberal You? 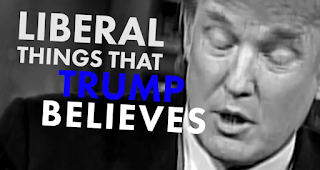 Did something happen in your life which gave rise to the born-again Trump? Was there a specific incident that made you stop believing in personal social freedoms and start subscribing to the moral standards of evangelicals? What exactly was this come-to-Jesus moment?

Sorry, but this sudden values-transfusion is a bit suspect. New Trump is such a stark contrast from old Trump. Here's a sampling of your liberal musings over the years:

-Regarding gun control: "I generally oppose gun control, but I support the ban on assault weapons and I also support a slightly longer waiting period to purchase a gun. With today's internet technology we should be able to tell within 72 hours if a potential gun owner has a record." (2000)

-Regarding same-sex marriage: "These cases have gone to the Supreme Court. They've been settled. And I'm -- I'm fine with that." (2015)

-Regarding transgenders and bathrooms: "There's a big move to create new bathrooms. First of all, I think that would be discriminatory in a certain way. It would be unbelievably expensive for businesses and for the country. Leave it the way it is." (2016)

-Regarding universal healthcare: "Everybody's got to be covered, this is an un-Republican thing I'm going to say, I'm going to take care of everybody....Who pays for it? The government's going to pay for it." (2015)

-Regarding the war on drugs: "You have to legalize drugs to win that war. You have to take the profit away from these drug czars." (1990)

-Regarding President Obama's economic stimulus: "I thought he did a terrific job...I thought he was strong and smart, and it looks like we have somebody that knows what he is doing finally in office, and he did inherit a tremendous problem. He really stepped into a mess...." (2009)

-Regarding immigration: "For people that have been here for years, that have been hard workers, have good jobs, are supporting a family, it's very, very tough to just say 'you have to leave, get out.' How do you throw someone out that's lived in this country for 20 years, you just can't throw everybody out." (2012)

-Regarding his politics: "In many cases, I probably identify more as Democrat." (2004)

-Regarding the Republican Party: "I really believe Republicans are just too crazy...I mean, hey, I lived in New York City, Manhattan all my life, okay? So my views are a little bit different than if I lived in Iowa, perhaps." (1999)

-Regarding Hillary Clinton: "I know her and she'd make a good president or good vice president." (2008)

So, where'd that guy go? Is he still inside you, placed in hibernation during the election so you could appeal to the lowest common denominator of intolerance, bigotry and hatred in order to win? Will he resurface, perhaps when we liberals need him most, like when it's time to name your Supreme Court nominee?

To be honest, I'm really not buying the whole church-Trump thing. Just like hanging out with all those generals doesn't make you any tougher, sidling up to staunch conservatives like Mike Pence, Newt Gingrich and Jeff Sessions doesn't make you a right-winger. You better be careful, because I think Paul Ryan and Mitch McConnell agree with me.
Posted by The Ostroy Report at 7:42 AM

Andy it is GREAT to have you back. We missed you. We all know that Trump is one sick person. A person that will say anything to make himself look good and make people like him. He only thinks of himself and will say anything just so in his mind it is the right thing to say at that particular moment. All of his promises during the campaign and now after, are just off the cuff crap that he knows are not true but he truly does not care. The problem is there are so many people out there that have fallen for his BS they now don’t know what really is the truth. Just yesterday Keith Olbermann put a video on line about Trump and what a sick man he really is. http://www.huffingtonpost.com/entry/keith-olbermann-trump-supporters_us_586f0eede4b02b5f858825ca Keith nailed it in his video and it is one that we all should watch and remember. I watched it no less than three times.

Trump will never finish his term, much less two or even maybe one term. He will be taken out of office because he will be deemed unfit for the position. Before it gets to that point though I feel he’ll just quit with some dumb reason, so it won’t make HIM look like a looser. Perhaps he wants to spend more time with his wife and family and his businesses. One way or another he will not last four years.